The vast desert in Middle Osteth, bordered by the Inner Sea to the west and the Yushad Ridge to the north, east, and south.

The A'mun is home to many Empyrean ruins, mostly of Dericost origin. You will find many Skeletons here. Tumeroks prefer dry climates and also have a presence in the desert. Aerbax used to conduct some of its early experiments here, and you can find its Dolls, Rifts, Marionettes, and altered Reedsharks lurking in the sands. The Burun Ruuk also have a small presence in the Desert near Fadsahil al-Tashbi's shop, where they have magically altered the dunes into swamp.

Emboldened POI are those indicated on the Ingame Map as yellow dots. See also Points of Interest Map 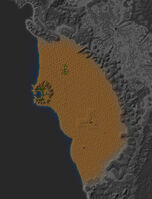 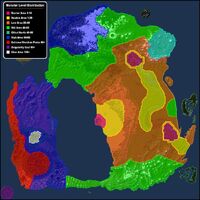 Spawn Distribution Map
Add a photo to this gallery
Retrieved from "https://asheron.fandom.com/wiki/A%27mun_Desert?oldid=469023"
Community content is available under CC-BY-SA unless otherwise noted.