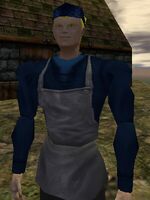 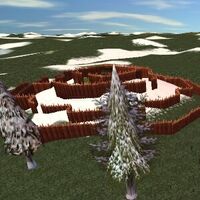 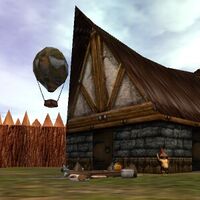 The house where Hoogan is prisoner and guarded by Sergeant Shanks. 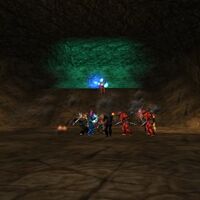 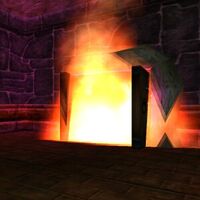 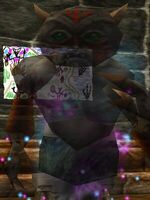 Bonecrunch
Add a photo to this gallery

Sergeant Shanks tells you, "I no talk to you. You are not Drudge and I told not to talk to not Drudge!"

You give Hoogan Drudge Fort Blueprints.
Hoogan looks the blueprints over.
Hoogan tells you, "Alright, we know we need to dig to avoid these tunnels the Drudges dug here and here, but we don't have anything to dig with. If we had a shovel we could really get out of here."
Hoogan tells you, "Can you find us a shovel? I don't know what the drudges used to dig their tunnels, but maybe you can find a clue around. If you bring me back a shovel I'll give you this key we slipped off of Shanks when he was sleeping today. I think it leads into their tunnels below."
Hoogan tells you, "Remember, if you find a shovel be sure not to give it to anyone else. Bring it to me."

You allow Hoogan to examine your Farmer Kao's Shovel.
You hand over 1 of your Farmer Kao's Shovels.
Hoogan bestows the title "Hoogan's Hero" on you.
Hoogan tells you, "Perfect! With this we can finish the tunnel we've been clawing and scrapping out under the bed in here. You've saved my skin friend. Take this key and bring the fight to the Drudges in their tunnels and caves below."
Hoogan gives you Cave Door Key.
Hoogan tells you, "The tunneling is going much faster now that we have the shovel you brought us. You should use that key I gave you to get into the Drudges under ground caves. I'm pretty sure their leader is down there. At least that's what Shanks let slip :the other day. Thanks again human and good luck."

Captain Burnja tells you, "Leave now humans or I burn you so bad you be dead!"

Handing in Burnja's Board with Nails

Retrieved from "https://asheron.fandom.com/wiki/Aerbax%27s_Prodigal_Drudge?oldid=457798"
Community content is available under CC-BY-SA unless otherwise noted.