Dojiro Sangi went missing some time ago, along with a drudge near holtburg, Harraag the Banderling, the Aun Town Crier from Timaru, and Claude the Virindi mage of Ayan. Now we have learned the fate of Dojiro. Thankfully he was not fully turned by Aerbax, and with our help, he has ended his new tortured life and rendered Aerbax's Prodigal Isparian experiment useless. See Missing Persons Investigation for more information. 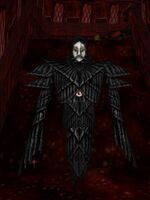 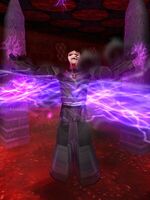 Dojiro Sangi
Add a photo to this gallery

Dojiro Sangi tells you, "They're turning me into some kind of monster! I hear... voices... inside my head... telling me to... Enighten? everyone? I don't... understand..."

Dojiro Sangi's eyes come into focus on you, and a look of wild desperation fills his ruined face, beneath the mask.

Dojiro Sangi tells you, "The potion they use on me! It's supposed to be dangerous, if not given slowly! Give it to me! Give me the Bottle! Help me ruin what they are doing to me!!"

Dojiro Sangi tells you, "You will not harm my Prodigal Child. He is your salvation, your race's chance at Enlightenment. He is one of my beloved vessels, our Future! Leave him be, it is only the pains of rebirth that he feels. He will unify us all!"

Dojiro Sangi casts Self Loathing on you.

Demerax the Sculptor's voice echoes through the area, "You cannot escape 'Asheron's Protection', little Sangi. Even death will not stop you from becoming my Master's beloved Child."

Demerax the Sculptor's laughter echoes along the walls.

Demerax the Sculptor is incinerated by your assault!

Demerax the Sculptor screams in rage as he dies!

A searing pain fills your mind, carrying the following words along with it, "You won't stop the Master's plans! It's too late to stop him now!"

Dojiro Sangi screams, his voice echoing with the sound of multiple voices, crying out in unison!

A voice fills your mind, "Pray for death, little meat-bag. Your attempts will not foil me forever..."

Ryukai Hiro tells you, "You have something for me?"

Ryukai Hiro tells you, "I recognize this... Where did you get this?"

Ryukai Hiro tells you, "I see. It is a great sadness that things needed to turn out this way, but you did the right thing, and saved Sangi from a terrible fate. Please, allow me to reward you."

Ryukai Hiro tells you, "If you have this, it must mean that Aerbax brought Sangi back and continued his mad plans..."

Ryukai Hiro tells you, "Thank you for once again freeing Dojiro Sangi. Please, accept this reward."

Retrieved from "https://asheron.fandom.com/wiki/Aerbax%27s_Prodigal_Human?oldid=443803"
Community content is available under CC-BY-SA unless otherwise noted.