The island of Aerlinthe was the first island expansion introduced as a high level hunting ground. The landscape spawns have since been updated and several dungeons added. Currently there are several distinct zones with their own distinct spawns. The central feature of Aerlinthe is a dredged, man-made harbor in the middle where shipped goods were loaded and offloaded.

Loritane sends sixteen great ocean-galleons and two skyships to the island, carrying the supplies necessary to build a mining outpost. Lord Loritane and Lady Raina accompany the vessels in Tinoriel. The navigation channel into the lagoon is dredged. Reservoir dug to collect rainwater. All local water sources tainted with sulphur and ash. An Old Ring, buried under ash and ejecta, is found during the digging. It is left undisturbed, but considered a good omen. The island is titled Aerlinthe by Lord Loritane, a name which came to him in a dream. The central volcano is known of old to be called Tenkarrdun, Dericost for "Stoic Blood." The smaller peaks to the northwest and northeast are found to have been named Cunara ("Steaming Heights") and Ernassen ("Land Reflected"), respectively. The lagoon is dubbed Raina's Harbor. -- The Aerlinthe Record

There is now a shortcut from east shore to the west shore via the Coral Tunnels. Alternatively you can follow the shore all the way around the island (east, then north, then west, then south).

The lagoon is dubbed Raina's Harbor.

The Blessing of Aerlinthe. A gromnatross makes her aerie on the peaks of Cunara. She is named Aurlanaa by the people of the port. 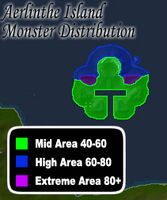 Aerlinthe Spawn Distribution
Add a photo to this gallery
Retrieved from "https://asheron.fandom.com/wiki/Aerlinthe?oldid=464460"
Community content is available under CC-BY-SA unless otherwise noted.