Aetheria are equippable items that provide a primary set bonus, enhancing a variety of things, and secondary "surge" ability, that at random times, dramatically improves the wielder or penalizes the opponent for a short duration. Unlike other magical items in the game, Aetheria's power is based upon a "level" system where the Aetheria starts at level 0 and levels up to a maximum level indicated by the icon. The higher the level, the more powerful the enhancement.
Aetheria is found on monsters and in chests as Coalesced Aetheria, which must be "revealed" first before being equipped by using an Aetheria Mana Stone from the Aetheria Quest.
When a character is created, initially he or she cannot wield any Aetheria. See the Aetheria Quest for details for opening the slots.

Note: You must first complete the Aetheria Quest in order to wield or reveal Aetheria.

Initially, Aetheria is found as Coalesced Aetheria in one of three colors: Blue, Yellow, or Red. Before it can be wielded, the sigils must be revealed using the Aetheria Mana Stone. Once revealed, it may be equipped into the corresponding slot, i.e. blue Aetheria into the blue slot; thus in order to wield three, you must have one of each color. Note that the color of the Aetheria also dictates the minimum level to use them:

When first revealed, Aetheria is level 0, offering no benefit to the wielder. In order for it to be useful, it must reach at least level 1, where it provides a set bonus and surge capabilities. Aetheria are leveled by wielding it and earning experience through quest rewards or hunting, but receive no XP from vassal passup, fellowship XP, nor additional XP from trinkets imbued with Augmented Understanding. It is unknown whether the Quick Learner (+5% XP hunting XP) Augmentation provides any benefit. Aetheria can be leveled very quickly using Stipends. Each Aetheria has an inherent maximum level beyond which it cannot be leveled further; this is indicated by the small number in the upper-right corner of the icon image.
Additionally, when assessed, the level and XP of the Aetheria can be found. The current and maximum level are found on the line reading "Item Level: X/Y". The first number (X) is the current level of the Aetheria, and the second number (Y) is the maximum level. The total and next level XP of the Aetheria are found on the line reading "Item XP: X/Y". The first number (X) indicates the total XP the Aetheria has so far, and the second number (Y) represents the XP required for the next level, i.e. not the total amount to fully level it from 0 to its maximum level.
Blue aetheria, which are equippable at level 75, start with an initial 750,000,000 XP. This was done so that getting an initial bonus from them at a lower level is easier.

The XP earned by Aetheria is in addition to whatever is earned normally and not divided among Aetheria. For example, if you earned one million XP from a quest, then you would receive one million XP to distribute (as normal), and every equipped Aetheria would additionally earn one million XP each.

In general, an Aetheria of level N requires 2^N-1 billion XP to fully level it (750 million XP less if it is blue since it starts with that.)

You use the desiccant on the aetheria to create an Aetheria Powder.

Every Aetheria is one of five sets. Each set has a different symbol on the aetheria icon, making them easy to distinguish. Which set an Aetheria belongs to is randomly determined when the Aetheria is revealed using the Aetheria Mana Stone.

Like other sets, wielding many items of the same set gives an increased set bonus. The set bonus depends on the sum of current level(s) of the equipped Aetheria in the same set. All Aetheria sets follow a pattern of diminishing returns, meaning as the set level increases the benefits diminish. Depending on need, it can be beneficial to combine Aetheria which are all the same set (maximize the benefits of a single set) or combine Aetheria of different sets (maximize the total set bonus level across multiple sets).

Any Aetheria that is level 1 or greater grants your character a Cast on Strike property called a "surge". These surges activate based on a single offensive attack, meaning multi-target spells and the cleaving property of two-handed weapons does not equate to an increased chance of Surging (nor will you surge on multiple targets). It is unconfirmed, but believed, that the act of being hit or attacked increases the chances of a surge triggering. The act of attacking causes the surge to activate, so it is not required that the attack successfully strikes the target.

Like normal buffs/debuffs, having a surge trigger before the previous one has expired merely surpasses it (i.e. extends the duration) and does not stack. However, equipping multiple Aetheria with the same surge property improves the chance that a surge will activate, likely by a straight linear factor (i.e. 2 means twice as often, 3 means three times as often). An active Surge appears as both a spell in effect and by a ring of symbols circling your character (green symbols) or your opponent (red symbols). See the image section for screenshot examples. Surges are considered short-term buffs, and can be dispelled by monsters.

Surge of Destruction : Your Damage Rating is increased by 20 for 10 seconds. This provides an additional 20% damage bonus and has devastating implications in Player versus Player combat.

Surge of Protection : Your Damage Reduction Rating is increased by 20 for 10 seconds. This effect is most noticeable (and useful) when War Magic spells hit the player, due the large damage base damage. Weaker physical attacks may have a reduction in damage of just a few points.

Surge of Regeneration : You begin to regenerate at an increased rate. You gain 150 points of health over 19 seconds in increments of 30 every 3.8 seconds. These Surges are not considered healing effects per the Sigil of Growth (i.e. no bonus is received).

Surge of Affliction : The target loses 150 points of health over 19 seconds. This is considered a drain attack and attack spell debuff (for purposes of some monsters who then start vulning you in return).

Surge of Festering : Your opponent is cursed so all healing effects are reduced by a Healing Reduction Rating of 20. For the next 20 seconds any healing effect from spell, potion, food, or kit is reduced. This is probably the weakest of the effects. It is also considered an attack debuff.

Due to the random combination of set and surge that come with each revealed Aetheria, there is a large variety of Aetheria combinations which can be equipped. Choosing what to equip is entirely personal preference, however it is common for many players to utilize "offensive" type Aetheria (destruction/fury set, destruction/affliction/fester surge) and "defensive" type Aetheria (defense/growth/vigor set, regeneration/protection surge). See the Aetheria talk page for further discussion and examples of specific Aetheria combinations. 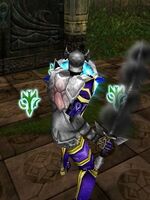 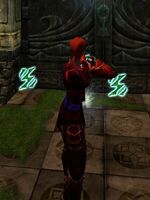 Active Surge of Festering (on Killagurg)

Active Surge of Affliction (on Killagurg)

Sigil of Defense and Surge of Protection

Sigil of Destruction and Surge of Affliction