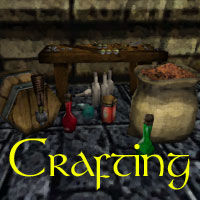 Alchemical Throwing Phials, also called Alchemy Phials, Alchemy Grenades, Grenades, and other variations, were created as a result of Janier al-Evv's research, with a little help from Ciandra. The research is described in A Treatise on the Combat Uses of Alchemical Phials. Creation uses Alchemy. Creation is a standard crafting skill check. After crafted, grenades can be given and traded. To wield a grenade, one must have the appropriate level of base alchemy skill, which varies by phial type. A shield can be wielded while throwing phials, which stack to 250.

Use an Enchanted Phial on an oil to create a single throwing phial, use a Enchanted Phial Pea on a concentrated oil to create 50 throwing phials (the skill check is higher when using peas). The type of phial determines the power of the spell. The type of oil determines which spell is cast. The throwing phials use Thrown Weapons skill, but they cast Phial's Accuracy (Increases Thrown Weapon skill by 500 points) on the wielder so Thrown Weapon does not need to be trained to hit creatures with the projectiles. However, this thrown weapons spell drops when you throw the last phial, so you will almost always be evaded.

The phials have mana, and an entire stack can be destroyed by using a mana stone on it. (The high-end ones are expensive to make, so be careful.)

For the old Infusions and Oils see Basic Alchemy.