Start a Wiki
Previous - All Announcements - Next

A Reign of Stone

Brann Mitenset stood in the doorway of the Exploration Society Outpost of Qalaba'r, watching as the dusk slowly snuffed out the light in the room. After Sir Alayne had been murdered, Brann knew the Society would be facing some rough times. But he hadn't known just how tough it would be.

Dereth was in the midst of exciting events. Lugians opening up civilized contact with the Isparians. The expanding Virindi presence in the wake of their Ayan Baqur invasion. New variants of creatures to catalog, and new items to identify. This was a time that begged for the Society to be at its prime, to use its store of knowledge and talents to make sense of a world that grew stranger by the day.

Andoun had said as much last night, before he'd drunkenly staggered out again for another evening of debauchery and gambling. The gambling bug had also bitten Saladur hard. And Ainea still had not returned from Linvak. After what had happened with Martine, and Andoun's continued commitment to his wastrel lifestyle, Brann wondered if Ainea Besu had made the same choice he was making tonight.

He was dawdling. Hoping . . . what? No, he knew this day would come. There were other people now to lead the fight. The fight for knowledge, the fight to form a community in the face of danger. Even if the Society did not survive in its current incarnation, there would be another coming. The need to know, to build, is what defines us, Brann thought, as he left the abandoned outpost and walked toward the moonlit hills.

He headed toward proof that it defined others as well.

Unlike any other gaming experience, the world of Asheron's Call continues to evolve. Last month, the Virindi launched their crusade against humanity, replacing the innocent townsfolk of Ayan Baqur; aiding their invasion were the eerie Dolls and Marionettes, and the deadly Virindi Executors. One can only wonder what additions -- and what dangers -- will be added when we open our April event, "A Reign of Stone."

A Reign of Stone

Seemingly carved from the mountain upon which it resides, many have long wondered about this ponderous fortress. Boasting walls of impossibly thick stone, none but the Lugians could have built such a place. Linvak Tukal! their bass voices cry -- the ultimate seat of their power. Until now, only the gray-skinned giants thundered through its cavernous halls.

On April 17th, the latest event for Asheron's Call was launched: "A Reign of Stone." While the Lugians are met in their own stronghold, the campaign against the Virindi continues unabated. Last month, the floating enigmas seized the town of Ayan Baqur, replacing its residents under the watchful eye of an elder Observer. Further conquests must be planned, for rumors circulate of a Virindi consulate reaching a hand out to the Lugian giants. Others tell of an underground lab infested with the twisted remains of Virindi experimentation. What role might the Director known as "Father" play . . . or the sinister Legates and Envoys? In these times of terror, the immigrant peoples of Dereth seek new ways to lighten their mood. Such need must explain the recently opened houses of games (or "dens of iniquity" to some), where adventurers returning from a successful hunt can gamble away their hard-earned gains. Some have entered clutching their last trade note, and left with prizes such as Pyreal Nuggets and Platinum Scarabs. Others, more confident, less fortunate, bet all they had, only to walk away with but a single, rotting cabbage.

Yet outside these gambling dens, other items of incredible wealth simply wait to be gained. Intrepid souls have returned to town with their packs boasting Lugian armor and gems, Virindi magic, and a deadly trio of weapons: Bloodletter, Fleshstripper, and Soulrender.

Perhaps these riches of Dereth have inspired the newfound cooperation seen among hunting parties. Now those who fall in battle may elect chosen companions to help recover the losses of their slain bodies. A much needed agreement -- for the rites of spring have become more dangerous, and rewarding, than ever!

Following is a list of the most interesting additions made to the game this update. However, please note that not all changes have been included -- that would spoil the fun of finding out everything that's been added or changed! As usual, though, the town criers, barkeeps, and scribes may know the latest news. Also, the trades of crafting and selling are always in flux, so changes to prices and abilities of items are not always listed here in their entirety.

In order to learn the full scope of April's event, "A Reign of Stone," be sure to read the Developer's Notes, April and the State of the Code. Continue your part in this incredible ongoing story, and we'll see you in Dereth! 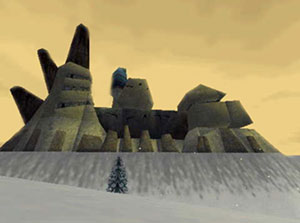 Here are just some of the additions made in the April 17 game update, "A Reign of Stone." The following list is comprised of detailed notes straight from the developers themselves. For a summary of things of most interest, be sure to consult the official event article, A Reign of Stone.

Pages from the Producer

Pages from the Producer

You win some, you lose some. For a long time, one of my biggest gripes with AC was that there weren't enough compelling non-combat activities. So when Dave Javier came to me with the idea of adding mini-casinos to Dereth for April, I was thrilled. They were designed in such a way as to accommodate frequent alterations to the prizes you could win, and give a much-needed shot in the arm to the waning Pyreal economy. April also heralded the long-awaited opening of Linvak Tukal, the mighty Lugian fortress. (Check out the video if you haven't already!) Combined further with new features like fellowship loot-sharing, corpse looting permissions, and the ability to quickly target fellowship members via the fellowship panel, it looked like April was shaping up to be one of the best updates ever.

We were mostly right. The casinos were indeed a smash hit -- in no small part because they were paying off Shards at a much higher rate than we intended! We needed to perform a small update early in the month to correct an error some people were having with the corpse consenting feature, and during that update, we felt it was necessary to take action regarding the massive flood of Shards into the economy. We did feel that the best fix would be an in-depth revision of the prize payoffs, but that was outside the scope of the small update we had planned. So, we temporarily removed the Shards as prizes from the casinos.

Have no fear -- Shards will be back as prizes, and at a more appropriate rate. My main regret is that we weren't able to get the word out that this change was going to take place before it went live. In the meantime, plenty of good prizes are still out there. . . and one day perhaps the mystery of the Golden Gromnie will be revealed!

Retrieved from "https://asheron.fandom.com/wiki/Announcements_-_2001/04_-_A_Reign_of_Stone?oldid=436665"
Community content is available under CC-BY-SA unless otherwise noted.