View source
watch 01:25
Jurassic World: Dominion Dominates Fandom Wikis - The Loop
Do you like this video?
Play Sound
Previous - All Announcements - Next

Crests of a Turbulent Sea

Ardry lurked in the bushes, closely observing his quarry, a high-ranking Tumerok. Up ahead, the Tumerok and its companions seemed to be conferring with a cloaked, sickle-wielding Virindi. Ardry noted with interest that one Tumerok carried a banner but he was unable to discern what device it displayed. After a few moments, the Virindi turned and created a portal, through which the Tumerok war party passed.

After a disorienting ride through the portal, Ardry opened his eyes in an unfamiliar Virindi installation, its twisted walls glowing red. "Don't recognize this place," he muttered to himself. "Must be new? Uncle Aliester would be interested to know how far the Virindi have moved." He made a note about the portal's location and began to explore the tunnels.

He wasn't able to explore for long. A group of Tumeroks noticed him and charged to attack. Unprepared to fight, he ran. Going purely on instinct, he sprinted through the twisting corridors, with more and more creatures picking up the pursuit. After a harrowing run, Ardry spotted the familiar pattern of a surface portal, the promise of escape.

Ardry grinned, gritted his teeth and bolted through, sidestepping one last swinging sickle blade. He closed his eyes as he felt the familiar wrenching pull of portal energy, taking him back to the wide-open spaces of Dereth. But something was wrong. Instead of the sound of the wind in the forest, his ears were filled with an ominous, thrumming hum. He opened his eyes and found himself facing the blank stare of a Virindi. There was a flash, a burst of searing pain, and Ardry felt himself falling.

Please Note: In this month's update, we have taken steps to reduce the perching that is currently happening in the Incunabula Vault. If you have a character on an obsidian pillar in the vault, it is advised that you move him/her before logging out prior to the update. You will no longer be able to stand on those pillars after the update. Those who are using them in the acid pit portion of the dungeon will fall down into the acid pit after the update. Admins will not be able to help you retrieve these bodies.

Unlike any other gaming experience, the world of Asheron's Call continues to evolve. With last month's escalation of the Virindi invasion, the citizens of Dereth find themselves locked in a titanic struggle for survival. What new machinations of the Virindi will be revealed in the weeks to come? Join us, as the Crests of a Turbulent Sea event opens.

Crests of a Turbulent Sea

With the passing of the summer Solstice, summer begins to fade into fall and the residents of Dereth find themselves locked in a struggle for survival. The Virindi continue to push further into Osteth, spreading the war to previously untouched locations--and this time, they are bringing new allies with them.

Travelers from across Dereth report sightings of army encampments and pennants streaming out across the fields above fearsome bands. Fleeing before the advancing formations, some have also reported seeing strange floating citadels towering over the landscape.

As the encroaching forces of the Virindi advance into the previously sheltered areas of Osteth, the lightning raids continue all across Dereth. Travelers seeking safety from the carnage find themselves traveling in large groups for defense. Yet even this tactic is no guarantee of survival, as the Virindi seem to hold no fear.

Many months have passed with many perils overshadowing the people of Dereth. Yet they struggle on as their ranks are bolstered by stronger and wiser new arrivals. Old timers look on the bright-eyed newcomers and remember the trials and tribulations of their own arrivals so long ago. It's a good thing the new generations seem to be better equipped to handle life in this unforgiving realm.
Following is a list of the most interesting additions made to the game this update. However, please note that not everything has been included -- that would spoil the fun of finding out all manner of things added or changed! As usual, though, the town criers, barkeeps, and scribes may know the latest news. Also, the trades of crafting and selling are always in flux, so changes to prices and features are not always listed here in their entirety.

Summer has begun to fade but the cooler temperatures have not heralded a lessening of the Virindi assault. In order to learn the full scope of August's event, Crests of a Turbulent Sea, be sure to read the Developer's Notes for August. Continue your part in this incredible ongoing story, and we'll see you in Dereth! 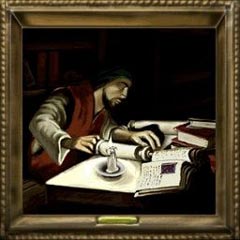 Letter to the Players for August 2001

Hello. My name is Ken Troop, the new Producer for Asheron's Call here at Turbine. I came to this position having been Lead Designer for Asheron's Call: Dark Majesty, our new expansion shipping soon. Before that I had been on the AC Content team, helping to produce the monthly updates and events.

I knew I wouldn't really be able to feel at home with the job until a problem had arisen requiring some words from the Producer. Unfortunately, this has happened sooner rather than later. Over the past week, since our August update, some players have been experiencing game sessions characterized by serious packet loss and random disconnects.

We have taken these complaints with the utmost seriousness. We recognize that the success and life of Asheron's Call depend on the happiness of our players. And we know that a game that becomes unplayable due to lag or disconnects is not a game that makes our players happy. It only makes them frustrated.

There are two very important issues here. First, why has the August update caused these problems for some of our players? Over the last five months, Turbine and Microsoft have worked to improve and optimize our network code. This was partially motivated by our desire to detect GEAR usage amongst unscrupulous players. But it was also a necessary step regardless of our GEAR fix. Our network code was in need of revision and improvement, and we have made this one of our top priorities over the last few months. However, some of these optimizations have interacted oddly with the current hardware configurations of the AC servers in ways that have only become apparent during peak playing times.

The second important issue is how and when we will resolve these issues. Our server programmers and Microsoft have been working very long hours during this past week to gather and analyze the various data and performance monitors from the servers. We will be rolling out a new patch on Thursday that we hope will address many of these performance problems, with contingency plans in place in case these patches do not have the intended effect.

We are grateful that the majority of the player base seems to have encountered few, if any, of these network problems. And for those players who have encountered problems, we appreciate the various bug reports and descriptions of network trouble that we have received. Some of these reports have been invaluable in our search for the problem.

Above all, we thank those players who are committed to our game and our service. We remain committed to you and your playing experience in Asheron's Call.