View source
watch 01:25
Jurassic World: Dominion Dominates Fandom Wikis - The Loop
Do you like this video?
Play Sound
Previous - All Announcements - Next 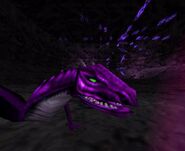 She was gone. The Isparians had stood as one against an ancient creature that had seemed unstoppable, and they had emerged as victors, again. The full depth of her hives and tunnels systems was still unclear -- certainly they all hadnt been found yet -- but she was gone. The festival season could commence and all was well.

But all was not well on Dereth. A queen lay in a death-like slumber, struck down by a treacherous hand. The olthoi, without the guidance of their ancient leader, formed into individual hives led by young and old queens. The would-be hero of the Isparians, Nuhmudira, was missing. Those who saw her last report that she appeared bewildered and stricken with some sort of malady. Sharing her mind with the olthoi queens was debilitating and perhaps too much for her aging body to survive. Then there was the singing and the laughter that floated on the wind and rubbed the bones of every living creature.

That was the past. Winter fast approaches, now. The festival season begins, but a melancholy permeates the crisp air. Something is happening in the dark corners of Dereth and its subtle evidence can be found all across the land. Reports of disappearances, shady travelers and a war brewing in the Valley of Death spread. Adventurers search through ruins uncovered by dust storms and new tunnels shaped of earth.

Not all news is disheartening. From Fort Tethana, news comes of the weakening in the ranks of the Renegades. Crafters have focused their attentions on unlocking the great mysteries of the objects coveted by the loyalists who have taken residence in the ruins of Yanshi. Mask makers promise a host of new ideas that they will offer during this festival season. Friends and allegiances have become a little easier to spot in a crowd, so too have enemies that stalk each other across the world.

In a room, light returns, servants stand once again, and an old man rejoices. Beings of a dark duality are separated; one descends deeper into the inky recesses of all there is, the reflection is left behind. A lonely man slips through the shadows, feeding from the fear and death that seeps across the land. A woman sits alone in darkness, shivering, afraid to sleep because of the visions that swell within her dreams; horror made personal. Voices, echoing in ancient halls, speak of righting what has been made wrong. Two figures sit at a fire and listen to the ramblings of a sleeping and feverish third. Darkness peels away from a womans mind and as she stirs from a terrible dream, she is reborn.

"What?" the barkeep asked. He looked the vagrant up and down, careful to note that this wasnt the typical dog-tired patron he saw. Still, there was a haggard look to this one. The travelers eyes were deep set, as though he hadnt slept in months, and his face was pale and thin. He looked half-dead to the barkeep. Then again, there were many men like this wandering around Dereth. But this was a little different.

"Ale Ive got a long journey home". The man said. He opened a hand and dropped a few pyreal coins onto the bar. Dust settled out of his hands and off his clothes.

"Been to the desert?" The barkeep asked, drawing a mug of ale from a spigot.

"Aye, just got back. On my way back to the Keep now." The man cleared his throat and looked around the bar. The barkeep thought he looked like a man with a load of guilt on his shoulders. But he wasnt going to press -- hed keep the conversation polite.

"I havent been to the Keep yet. No need of it. Ales still being delivered from all over and Lubziklans delivered his latest batch of cider. Only person missing from the festival is Ulgrim." At that the barkeep rapped his knuckles on the bar top. His patron looked a little startled as he looked over the edge of his brew. "Yeah word is that whoever betrayed the High Queen is still at large" He clucked his tongue. His guest smiled and set his mug down on the bar, then stood to go.

"Thanks for the ale." The haggard man bowed shallowly.

Any time friend. He watched the man pass out through the tavern door. He shook his head and said aloud, to no one in particular, "Betrayal never pays."

Last month the heroes of Dereth fought a climactic battle against the broods and swarms of the Ancient Olthoi Queen. While High Queen Elysa Strathelar remained comatose and the Council sought to discover the identity of her assassin, Nuhmudira directed the counterattack.

It was a time of strange discoveries and stranger allies. Surprisingly, the Undead provided a key ingredient to victory vials of poison that were used to contaminate the Olthoi food stores. While some heroes poisoned the food supplies and others battled the Ancient Queen directly, Nuhmudira cast a powerful spell that joined her mind to that of the enemy.

Faced with an alien presence in her mind, surrounded by Isparian weapons and spells, and sensing that her broods would be poisoned if they remained, the Ancient Queen fell back. She collapsed the tunnels behind her and fled from Dereth.

After months of battle, the Olthoi have been stopped! Those Olthoi remaining on Dereth are still a threat and even now Sentinels have taken up residence in the Queens chambers but the immediate danger is past.

Questions remain, of course. What were the songs that Nuhmudira sang as she left the caverns? What did the Undead gain from this bargain? Whose voice was laughing on the wind?

Now its time to think about whats happening this month. Here are three of the more interesting changes to the game being made in the November event.

The Tumerok and Lugian Renegades who laid siege to Fort Tethana have pulled their forces back. The power levels of the three Generals have been adjusted to make them challenging to fight, without the time commitment that the quest previously needed.

While making these changes to the Renegade Raids, we discovered that the Quadruple-Bladed Axe was not working as designed. It was intended to have a hidden quality similar to that of the Renegade Bow and Renegade Crossbow, but we discovered that the hidden quality was not working properly. This made the Axe considerably less powerful than we wanted it to be. Starting today the Axe is working as designed. Axe warriors may want to give this weapon another try!

After watching the dynamic carefully for some time, we decided that the Crippling Blow imbue was not quite as powerful as we had intended it to be. Therefore we increased its maximum critical hit multiplier on melee and missile weapons. Because war magic critical hits are handled very differently, no change was necessary to Crippling Blow imbues on wands, staffs, and orbs.

Those who will benefit most from this change will be those who were already getting the maximum effect from the imbue. However, all should see some benefit. Crippling Blow should now have approximately the same level of effectiveness as the Critical Strike imbue.

November Letter to the Players

Welcome to the November 2003 Letter to the Players. By now, you've come face to face with the Ancient Olthoi Queen, and perhaps even found a way to defeat her. Now is a good time to take a breather and look into the future!
Splash Screen Changes

We hope you enjoyed this month's changes to the opening splash screens and the character select screen. As the Olthoi will no longer be an immediate threat in November, these screens will revert to their original look. For those players who want to remember the days when the Olthoi overran Dereth, we've included the screens in this Letter.

With the Olthoi threatening all of Dereth, the three mask makers and their apprentices did not have a chance to create new masks for the month of October. They've decided to cast aside tradition and they're hard at work creating new masks for November!

As if the mask makers didn't have enough work to do, the hunters and explorers of Dereth are reporting better luck in retrieving whole limbs and heads from the creatures that they fight. November should see more of the guises and masks from previous years! However, the creatures that drop these body parts have changed in many cases.

Starting with the November event, you'll see several changes to the radar:

We're happy to announce that, starting in November, you'll be able to change the color of your Sunstone Gauntlets. These gauntlets can't be dyed, but there is a method—known only to certain denizens of Dereth—to modify their original flamboyant shade.

In addition, you will soon be able to stack several of the life protection gems that you create via alchemy in one inventory space. Both of these are features that players have asked for repeatedly in the past several months, and we are pleased to be able to bring them to you.

As we mentioned in the October Letter to the Players, it was necessary to take the AC:DM site down for maintenance. After the maintenance, one feature we plan on introducing is a dynamic Q&A section. Whenever we answer one of your questions on our forums or a fan site, we want to have that question and answer mirrored in the Q&A. That way there will always be a single site to check to see the most recent information, or to find out if your questions have been already answered.

As always, this is just a glimpse at the content we have in store for November. On the day of the event, be sure to read the Dev Notes and Rollout Article for the scoop on everything else we're adding!