The Story of Asheron's Call 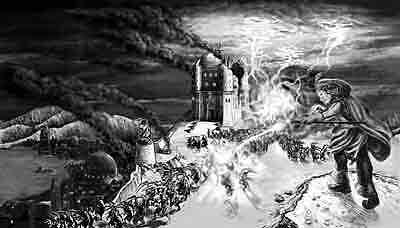 The legendary magician Asheron has summoned many to Dereth; only the bravest have answered the call. Here, warriors battle creatures of awesome might, magicians will discover magical items and create new spells, and treasure hunters will seek out precious relics. Quests will impel adventurers to uncover the wealth and lore of legend. Adventurers will form allegiance and fellowships, for often many can accomplish what one alone cannot.

What Came Before
In ancient times a powerful race—the Empyrean—flourished across the island of Dereth. Their empire fell into ruin when the Empyrean Magician Asheron accidentally opened a portal to another world, ushering in hordes of vicious monsters known as Olthoi. Asheron sent the Empyreans into hiding in a dimension between worlds and stayed behind to try to find a way to defeat the Olthoi.

The Empyrean's flight opened more portals that summoned other creatures to Dereth, among them humans from the world of Ispar. Asheron quickly saw the humans' potential as allies, and concentrated on summoning more to Dereth. For many years the humans lived as Olthoi slaves, but a band of rebels—led by the noblewoman Elysa Strathelar and the warrior Thorsten Cragstone—chose to fight. Aided by Asheron's Magic, they slew the Olthoi queen and won freedom, though the fight cost Thorsten his life. Now, ten years later, Elysa has vanished and Asheron's whereabouts are unknown.

Ispar: The World That Was
Ispar is home to many different cultures, including the warlike Aluvians, the scholarly Gharu'ndim, and the disciplined Sho. Recently, portals began to appear there. They seemed to exert a mystical pull upon those who saw them, almost as though someone were beckoning from the other side.

The most adventurous answered the call and were transported to Dereth with no way to return. At first the portals appeared only in the land of Aluvia, but in recent years they have spread to the Gharu'n and Sho realms. Their spread may well continue into other lands.

Where Did Portals Come From?
The portals found on Dereth are a remnant of the Empyrean civilization. Asheron himself created the first one, and soon after their use spread across Dereth, allowing instantaneous travel all over the island—and to the catacombs beneath it—though the flow of portal space.

Asheron also experimented with portals for travel to and from other worlds until one experiment unleashed the Olthoi upon Dereth. When the Empyrean fled the world though the portals Asheron created to save them, their departure produced a disruption in portal space. This caused many new portals to appear in Dereth from other worlds—including Ispar, the human homeworld.

Dereth: The Word That Is
When humans first arrived in Dereth, it was in ruins, overrun with ferocious creatures. Faced with the prospect that they might never return to Ispar, humans have made the island their new home. They have built towns and carved out small pockets of safety in a perilous world.

Though the Empyrean have vanished, some of what they wrought remains; magic flows through the land; mystical portals carry travelers many miles in a heartbeat; enchanted Lifestones bind the spirits of those who use them, allowing the dead to be resurrected. Those that come back to life find that some of their life force has been drained away—some say to power Asheron's magic. Even more ancient secrets may lie amid the crumbled remnants of Empyrean society.

The World That Could Be
Many challenges await newcomers to Dereth. Exploring the island is both dangerous and rewarding: monsters lurk everywhere, especially in the hostile Direlands, and wondrous sights, both natural and crafted by the Empyrean, await the adventurous. Scores of dungeons—some built by the Empyrean for arcane purposes, others dug by the Olthoi or other creatures as lairs—riddle the earth. Somewhere among these is the stronghold of Asheron himself, it location lost with Elysa Strathelar and waiting to be found again.

The island of Dereth is strange, beautiful, and perilous. Power and riches are here for the taking. Many mysteries wait to be explored and solved, not the least of which is the whereabouts of the lost Empyrean race. And, it is said, there is a deep and ancient darkness at the heart of things, striving to reawaken. These quests are not for the faint of heart—brave adventurers are needed to explore the dangerous wilds, probe the deepest catacombs, and rise as rulers in this new world. 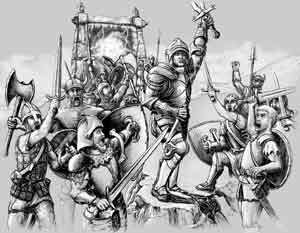 Retrieved from "https://asheron.fandom.com/wiki/Asheron%27s_Call_Manual/The_Story_of_Asheron%27s_Call?oldid=438488"
Community content is available under CC-BY-SA unless otherwise noted.