This guide briefly explains how to get characters level 15-79 to be flagged to use the Portal to Bur. For more details, see the individual quest guides linked to in the walk through. For information on flagging for characters level 80 and above, see Asheron's Departure.

The notes you receive from these quests contain hints for the flagging for higher level characters. 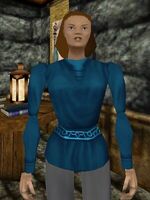 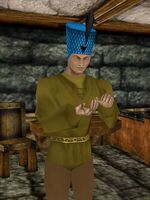 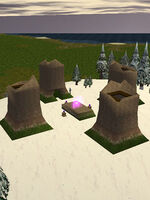 Portal to Bur
Add a photo to this gallery

Handing in Ancient Shard of Metal to Felscuda

You give Felscuda Ancient Shard of Metal.

Felscuda tells you, "Where did you find this? From the cellar? But how...this bodes ill..."

Felscuda tells you, "I shall tell you what I know - what I truly know, that is. The cellar you have exited leads into what remains of a Falatacot ruin."

Felscuda tells you, "That is right - I know of the Falatacot, and I've studied much more than I make Lady Folthid or passers-by aware of. It is no accident that Lady Folthid's house was built here. I suggested it, at the advice of...another patron. I remain in service here secretly - but as Lady Folthid, being a noble, might talk to other powerful individuals, I have only revealed myself to you as you are not so powerful, yet. Please keep my secret."

Felscuda tells you, "Since the house was built, I have watched for signs of activity from the cellar. It has been quiet, but this device indicates new activity."

Felscuda tells you, "Someone has attempted to use it recently - I can tell by the small tarnish here, which indicates that a surge of portal magic enveloped the device. However, whatever magic was attempted did not work. This is but a fragment of the entire device, and the device would have needed to be whole in order to work properly."

Felscuda tells you, "If I were to guess, I would say that there was a faction of Falatacot somewhere doing something - I am sorry I cannot be more specific."

Felscuda tells you, "Someone should find Asheron and inform him...but he has not been seen in so long. This note may help. It was research he was conducting shortly before he left. May it be of use to you."

Handing in Inscribed Purple Gem to Bretself the Translator

You give Bretself the Translator Inscribed Purple Gem.

Bretself the Translator tells you, "I am surprised I have been seeing these in circulation. Can you keep a secret?"

Bretself the Translator tells you, "At one point a few years ago, I was honored to receive a letter from Asheron himself, through Scholar Antius Blackmoor. I was flattered to have received it, but what he asked me was unusual."

Bretself the Translator tells you, "He wished that I would watch out for anyone bearing these gems. If the person seemed powerful enough that they might know how to use them, I am to plead ignorance. I do not think you are, however."

Bretself the Translator tells you, "Therefore, I shall tell you - they are from a hidden cache that Asheron stored in the mountains, for use in portal creation. I am not certain precisely where he intended to open a portal to, but the gems were to be a power source. The inscription reads, simply, "Property of Asheron Realaidain," nothing more."

Bretself the Translator tells you, "I shall share with you the letter I received. Perhaps it will tell you more about the gem and its uses. I'll also give you this trade note as payment for the gem - I am supposed to retain them, but I can at least offer you fair market value for them."

Handing in Metos Pyreal Motes to Golem Warden of Metos

You give Golem Warden of Metos Pyreal Mote.

The golem speaks in a low, gravelly, regulated voice.

Golem Warden of Metos tells you, "My power level has reached half. If you supply me with a mote from the Halls of Metos in the southwestern part of Ireth Lassel, I should be able to fully serve you."

You give Golem Warden of Metos Pyreal Mote.

The golem speaks in a normal voice - perhaps Empyrean by its accent.

Golem Warden of Metos tells you, "For you who have come this far, I leave a message. Your diligence is appreciated, even applauded, but you should not attempt to reconstruct the portal to Bur. I have learned only too well the risks associated with opening portals to other worlds, and alloing them to remain open. It is better if my portal remains closed. I should be able to repoen it when it is time for me to return. At this point, I shall hopefully have with me a solution to the Burun problem."

Golem Warden of Metos tells you, "Also, I imagine that Metos would have appreciated if I mention that there are no inactive golems available for you. Unfortunately, I required the last one for the portal ritual."

A piece of paper is ejected from the golem slowly, which you take.

Golem Warden of Metos gives you Ruminations and Warnings on Portal Creation.

Retrieved from "https://asheron.fandom.com/wiki/Asheron%27s_Departure_Lower?oldid=433683"
Community content is available under CC-BY-SA unless otherwise noted.