Asheron Realaidain is a Yalaini mage and central character in the story. He rediscovered the lost art of planar magic and with it changed the world of Auberean forever. His research in portal magic inadvertently lead to the demise of his people, thanks in part to Gaerlan for leaving a gateway open on the Olthoi home world. Virindi tampering would later lead to portals appearing on planets that the Yalaini had once explored, including Ispar.

A Letter From the Heart

A Note on Ancient Goblets

A Note on Ancient Necklaces

A Note on Ancient Rings

Letter to Bretself the Translator

Mote and Crystals needed for the Golem Construction

Ruminations and Warnings on Portal Creation

An early model of Asheron or a generic Empyrean. 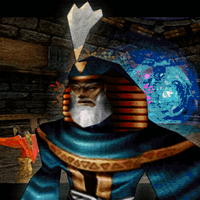 Portrait of Asheron seen on the Soul Stone Quest. 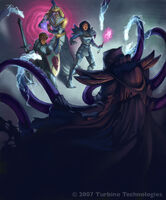 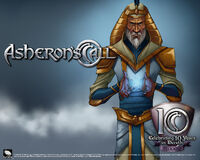 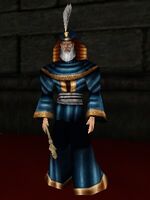 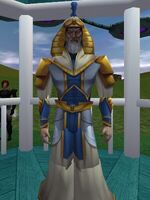 Asheron at the Royal Wedding.
Add a photo to this gallery

Retrieved from "https://asheron.fandom.com/wiki/Asheron_Realaidain?oldid=439837"
Community content is available under CC-BY-SA unless otherwise noted.