At 60.0S, 88.0W on the far western shore of the Direlands, Ayan Baqur, despite it's isolation, is still one of the principal cities on Dereth and was founded during the Heroes' Respite event.
Ayan Baqur, often abbreviated as AB, has seen much turmoil over the years. It has been taken over by Virindi. It has seen countles incursions by ravening monsters from the surrounding Direlands, including visits from the fearsome White Rabbit. And it was camped for quite some time by a persistant Coral Golem Viceroy.
It remains important today, being a center of questing and the home of Ulgrim the Unpleasant.

Ayan Baqur is an isolated community. There are no portals to AB from any town, nor any of the Portal Nexus Dungeons. There is, however, a portal in the chapterhouses of both the Ordina Rossu Morta and the Whispering Blade. As Ayan Baqur is a required stop to gain access to said chapterhouses, you will probably need to find somebody who can summon the portal for you at some point, or else risk the harrowing run through the Direlands.

There are two shortcuts for getting to Ayan Baqur:

Ayan Baqur sports portals to the Town Network, and Fort Tethana can be reached via the Colossus Foundary portal beneath the statue in the center of town.

It should also be noted that those who have completed the Gateway to the Deep quest can use the nearby portal as a short cut to the southern landbridge.

Those who have joined the ranks of the Whispering Blade can also use the nearby chapterhouse as a short cut to Silyun or the capitals of Cragstone, Hebian-To, and Qalaba'r. There is also a portal to Ayan Baqur which is one of the only places that you can portal-tie that drops you directly in town.

The Black Spawn Den Portal Device can also drop you close to AB.

Creatures that are commonly found in the area surrounding Ayan Baqur. 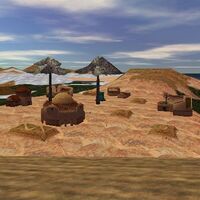 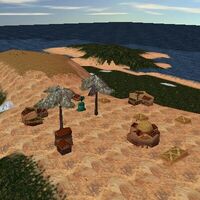