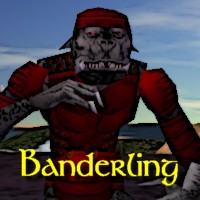 Harraag, Banderling Champion tells you, "I, Harraag. Forgive words not mine, I make them best I can. We wanga here. It our homes and Drudge try steal. Most smart Drudge become. Not like home, old home. Dnaraag chieftain, wants safe place for tribe. Find this home. No peace here. Only Wanga."
Harraag, Banderling Champion tells you, "Drudge grow smarter. Drudge make better wanga. Gods shine not on banderlings. Wanga goes poorly. The drudge not natural."

Harraag says, "You invade my refuge! Now you all die!!!"

Harraag screeches in confusion and pain as he crumples under the force of <Killer>'s deadly blow!
As Harraag's body crashes down, you hear the sound of something crystalline shattering apart.

As the Banderling Bloodblade hits the ground there is a sound of scraping metal, possibly a key.

As the Banderling Raider Guardian hits the ground there is a sound of scraping metal, possibly a key.

As the Oversized Banderling Ogre hits the ground there is a large metallic thud, possibly the hauberk you search for.

Retrieved from "https://asheron.fandom.com/wiki/Banderling_Utterances?oldid=445172"
Community content is available under CC-BY-SA unless otherwise noted.