This castle is located in the northeast of Osteth just outside the mountains that surround the Olthoi North. It was originally inhabited by a group that was kicked out of Cragstone and took up residence in the castle. Later a disagreement amongst those in that group led some to go west to Foster's Fort, which they renamed Neydisa Castle after their leader. Bandit Castle is currently the home of a group of Bandits led by MacDugal. 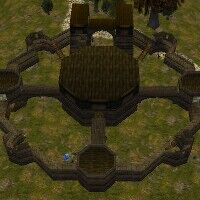 Bandit Castle
Add a photo to this gallery
Retrieved from "https://asheron.fandom.com/wiki/Bandit_Castle?oldid=454611"
Community content is available under CC-BY-SA unless otherwise noted.