Ben Ten is a hero of Early Dereth who protected the Sho people from the dangers of their new world. Originally, little was known about Ben Ten by the people of Dereth - even her gender was a mystery for some time.[1] (Official) rumors of Ben Ten included that she was the first Sho to arrive in Dereth, and that she was the legendary Sho hero Koji, sent to Dereth by Jojii. Ben Ten disappeared from the public eye prior to Portal Year 10 (the launch of the game), and was not heard from for several years. One of her most famous deeds was defending the town of Yanshi against the Tumeroks and, during the Beta of Asheron's Call, helped defending Rithwic.[1][2][3]

It was rumored she was seen again in the early days of AC, but these rumors where never confirmed by an actual appearance.[4]

In the beginning of the Favored Sons story arc Ben Ten's influence returned to Dereth. Ben Ten asked Ardry the Dubious to assist in a few matters. Additionally, she apparently had a small following of students over the years. These students began to show up in various towns in Dereth, in an effort to learn what corruption was behind the recent arrival of the Tanada clan of Nanjou Shou-Jen[7][8][9] and to investigate the disappearance of Asheron, locate him, and return him to Dereth. [10][11][12]

Recent patch articles and in game text and NPC speech hint that Ben Ten may in fact be Yalain, and not the Sho she was thought to be.[Citation Needed]

Together with Harlune, she investigated the activities of the Apostate Virindi and Aerfalle's involvement with the disturbances in the ley lines.[17] 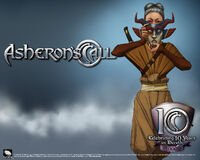 2009 Official Artwork (wallpaper)
Add a photo to this gallery

Retrieved from "https://asheron.fandom.com/wiki/Ben_Ten?oldid=259934"
Community content is available under CC-BY-SA unless otherwise noted.