November 2009: Letter from the Producer

Disclaimer: Screenshots may not reflect the final product at release. 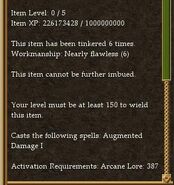 Details at: 2009 Letter From the Producer, Lay of the Land Teaser, and Wedding Preparations (Quest)

Prince Borelean Strathelar and Hoshino Kei are getting married. With the wedding the people will want to look their best (see tailoring and barbering below) and new races are being offered citizenship.

Details at: 2009 Letter From the Producer and Dev Comments - Tailoring

Tailoring will allow players to customize the look of their loot-generated armor.

Tailoring will also include a secondary ability - reducing multi-slot armor to single slot coverage, while still retaining the multi-slot looks. For example, you will be able to reduce a pair of Amuli leggings to only cover and protect the abdomen, but visually it will still look like it covers full legs.

New Hairstyles and a Barber

Details at: 2009 Letter From the Producer

New hair styles and facial features are planned on being added. To allow previously created characters to select these new features, barbers will be added to allow alterations to hair, face, and perhaps skin color.

Details at: 2009 Letter From the Producer

A new character option is being planned which will allow players to visually hide their helmets, granting characters the ability to show off their new hairdos.

Details at: 2009 Letter From the Producer and Dev Comments - Delayed Features

These features have been delayed.

Details at: 2009 Letter From the Producer, Shedding Skin, and Dev Comments - New Races

New playable races are planned on being added. Currently, the plan is to add four new races total, with one being added in April and another being added every two months. These races will all be non-human races - they are not planning on introducing Silverans, Rouleans, Milanteans, or the Souia-Vey as playable human heritages.

The first new race will be Shadows. They will be introduced in the April event. Shadows will come in two types: Umbraens, who will have no legs and resemble Umbris and Panumbris Shadows (among others), and Panumbraens, which will have legs. These two Shadow types are still counted as one new additional race, and there are still three other races which will be introduced.

Story-wise, the new playable shadows will be followers of Isin Dule, a close friend of Ilservian Palacost in life and the traitorous Shadow General of Bael'Zharon during the Fourth Sending of Darkness. Using the work of the Virindi Aerbax, Isin Dule has discovered a way to subdue the chaos within them. Isin has struck a deal with Asheron and these newly 'freed' Shadows have been allowed the full protection of the Light that Asheron grants to Isparians.

Gameplay/Balance-wise, the Shadows (and all the new races) will be identical to humans in most aspects. They will have the same innate protections and armor and Weeping Weapons will work the same on all the playable races. The only difference in the new races will be their starting skills and their free starting augmentations - augmentations which other races will have access to via the regular Augmentations Quests.

Aetheria are new items which are unlike anything else currently in Asheron's Call. For full details, read the article above which covers them in depth.

Retrieved from "https://asheron.fandom.com/wiki/Big_Spring_Patch_Preview?oldid=452108"
Community content is available under CC-BY-SA unless otherwise noted.