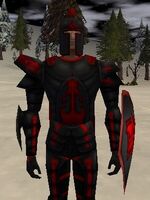 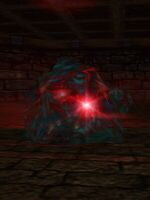 Bloodstone Crystal Stockpile
Add a photo to this gallery

As you activate the runes in the order Sir Donovan gave you, you can feel the buildup of energy in the pillar.
Pillar teleports you with Entering Lord Kastellar's Lab.

As Lord Kastellar collapses into dust, a maniacal voice echoes in your mind, "You're too late <killer>! The Bloodstones are complete, and you will never stop them now!"

As you touch the pillar, you can feel the magics within it reacting to your enchantment.
Pillar teleports you with Entering the Bloodstone Factory.

You bring Gurog Guardian to a fiery end!
With a thunderous explosion, the stockpile is destroyed, leaving only scattered pieces of debris to mark its passage.

Retrieved from "https://asheron.fandom.com/wiki/Bloodstone_Investigation?oldid=406253"
Community content is available under CC-BY-SA unless otherwise noted.