The Burun homeworld. The entrance to Bur first appeared during the Bur Portal Summoning live event (part of which is now a fixed quest).

No Lifestones exist on Bur. 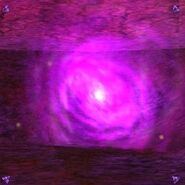