Though the base of the lore around Candeth Martine is laid during the The Rise of the New Singularity Story Arc, his major role is during the Elements of Revenge Story Arc.


As Martine, he played a major role in the development of the Simulacra and Dranith Menacet [1] and the making of the Singularity Weapons Quest [2] [3].

In P.Y. ??, Sir Candeth Martine was taken from his homeland of Aluvia and found himself on Dereth. On Ispar, he left behind his young daughter Aritta and wife Melanay.[4] [5][6] When he first arrived, he felt lost and alone[7]. He joined The Exploration Society so he could help other new arrivals[5]. On one mission, observing a Mosswart tribe in the Blackmire Swamp west of Sawato[8], he disappears without a trace.[9] It turns out he was betrayed by his mentor Mikael Alayne, and given up to the Virindi in exchange for their help against the Hopeslayer.[10][11]Main instrument in his capture was the Mosswart Chieftain Arrgkh Mearrgkh and his tribe, who was promised great powers by the Virindi in exchange for a captive human.[12][13]

Subject to the Virindi Experiments

Aerbax[14][15] was responsible for altering Candeth into the human-virindi hybrid known as Martine.[16][17] In his writings, Martine refers to the Virindi leading the experiment as "Master" and "Jean", the leading Virindi being "The Overseer" , the Virindi refer to him as "Puppet". [18]He manages to escape from his Virindi Masters and having suffered himself so much, seeks to disrupt the Virindi experiments.[10]

After escaping from the Virindi, he seeks revenge. Eventually, he kills the one who betrayed him, Mikael Alayne. [19] [20]Martine also revenged himself by killing the chieftain of the Mosswart who captured him and delivered him to the Virindi, Arrgkh Mearrgkh, and destroys their sacred object, the Tribal Shroud.[12]He started searching for the Overseer that made him into what he was.[17]Martine also blames Asheron for working together with the Directive, and being responsible for separating him from his family.[21][10][17]With the help of his minions, he wrecks havoc under the Isparians. [22]


During the Elements of Revenge story arc, Martine attacked the starter towns where new Isparians first land on Dereth. He destroyed all the starting locations except for Holtburg, Shoushi, and Yaraq.[23]
One of Martine's plots was to kill Borelean Strathelar by creating Simulacra in the image of the Strathelar Royal Guard.[24][25] These Simulacra were also used to raid the Arcanum Research Facility, to seek the power of the elemental essences.[26][27]
He duped Nuhmudira into aiding him in his acquisition of raw power, in the collection of the invisible rivers' power, tapping into the so-called Ley Lines. [28] Martine was extraordinarily powerful, but the conflict between his own mind and the virindi-consciousness also drove him insane.[17][21][29][30]
Asheron tried to heal him, but though his body seemed healed, his mind was still raving.[21]
His madness continuing, Martine appeared as a pretty destructive character during Live events in the Hidden Vein patch, raiding several towns and other locations such as the Obsidian Plains. Sometimes he appeared friendlier, exchanging Renegade's Tokens for Quiddity Ingots [31] Growing more insane, he secretly seeks out Elysa, thinking more and more of her as his wife.[32][30]>[33][34]
Martine tries to kill Asheron, almost succeeding.[35][34] During the Castling event, Martine appears at two of the gatherings called out by Elysa Strathelar (June 28th and July 8th), accusing Asheron of foul play, and again confusing Elysa and his lost wife.[36] [37]

Martine disrupts portal space by creating a portal from the mainland of Dereth to Marae Lassel when he seeks to avenge his suffering by destroying the Virindi structures on the island.[38] An Empyrean named Gaerlan escapes[34] and at first, seems to want to help him.[10] Gaerlan stays in Martine's Retreat.[39][34] With his assistance, Martine creates Dranith Menacet and plans for the assassination of Borelean.[34]Gaerlan is also the one reinforcing's Martine's ideas about the Isparians planning to kill him and his "son" Dranith Menacit.[34]


In secret, Gaerlan starts experimenting with Elemental Magic and creates the elemental cisterns to rise his Citadel.[39] Gaerlan reveals his motives and goals by attacking Asheron directly, and the role Martine played as his pawn becomes clear. This results in Martine falling into a deep depression.[40][41] During the Repercussions event, Martine could be found in Martine's Retreat. This location opened up after the final killing of Dranith Menacet. Players could hand him either the Tusker Husk or the Letter for Melaney to strengthen the Virindi or the Human influence respectively.
A visit from Elysa's son Borelean roused Martine from his solitude and convinced him to aid Asheron, Elysa and all Isparians against Gaerlan. [10][42][43] Martine appears a few times after the different Cores of the Cistern have been destroyed during the The Elemental Cisterns live events during the Atonement event.[44] The final battle at September 18th between Gaerlan and Martine ends with the fall of Gaerlan's Citadel and the disappearance of Martine[45][10]
Martine survives, and from his later conversations with Asheron, it becomes clear that the majority of the players handing him the Letter for Melanay, made him make his choice to side with the Isparians.[46]
During a live event, a battle ensued between Gaerlan and Martine at the top of Gaerlan's Citadel; Martine was slain. Martine's Robe and Martine's Mask can be found at the end of the Gaerlan's Citadel quest.

A Journal by Martine

Dranith Menacet says, "Father...Father... My body crumbles to dust, am I forgotten. I am dead. I am sorry father I have failed you and will rise no longer."
<Player Name> has slain Dranith Menacet. As the Hollow Minion bleeds its last bit of life onto the ground, it calls to its farther in a child-like voice. "Father, I have failed you. They will find the way to your home." In Rithwic, a new portal appears. 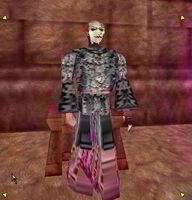 Martine in his retreat during the Repercussions event. 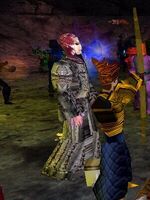 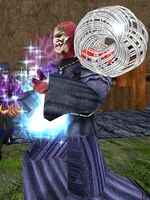 Retrieved from "https://asheron.fandom.com/wiki/Candeth_Martine?oldid=457976"
Community content is available under CC-BY-SA unless otherwise noted.