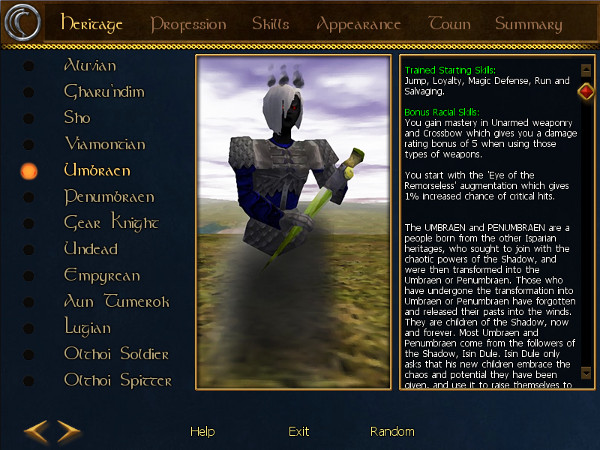 Before you can create a character, you must first select a server to play on. It is important to remember the server you select, because your character will only be available on that server. There are nine servers, or worlds. They are as follows: Frostfell (FF), Harvestgain (HG), Leafcull (LC), Morningthaw (MT), Solclaim (SC), Thistledown (TD), Verdantine (VT), Wintersebb (WE), and Darktide (DT). Darktide is the player vs player server, all characters created here are Player Killers and can never convert to a Non Player Killer. The other eight worlds are all Non Player Killer worlds, although they do allow you the option to become a Player Killer or Player Killer Lite.

If you wish to play on one of the eight NPK worlds, they are all virtually identical. There are no official or unofficial Roleplay servers, European servers, or other specialty servers. The only differences between the eight NPK worlds is the population and the players it is made up of.

If you wish to play on Darktide, know that starting out fresh there can be very difficult and frustrating. Also be aware the the Code of Conduct is not strongly enforced there.

Once you have chosen a world, click the Create Character button to begin.

Race and Heritage play only a minor role in character creation and development, and that is what free Augmentation you start with.

Umbraen and Penumbraen Shadows receive the Masteries Crossbows and Unarmed Weapons, and start with the Eye of the Remorseless augmentation for free. If you don't plan on taking advantage of one of the other races' augmentations, shadows may be a good choice as the free augmentation saves you 4,000,000,000 experience and a Blank Augmentation Gem.
Shadows have access to the same Hairstyles as the Isparian races, but can also have pink/purple hair. All shadows start with a crown of smoke (the Shadow Crown), which can be removed at a Barber.

For further information on playing as an Olthoi, see Olthoi Play

Olthoi are an advanced racial option. Olthoi must always be ready for player versus player combat. Although Olthoi do not gain experience, they start the game with resources to provide a threat to any player.

There are no true classes in Asheron's Call. The developers have provided some basic character templates, but you can also choose to create a custom character. The basic templates are Bow Hunter, Life Caster, War Mage, Wayfarer, Soldier, and Swashbuckler. You can see their exact specifications by following their links. Please note that the attributes for the basic templates are not set in stone. You can adjust them as much as you want. However- if you adjust them too much, your character will be classified as a custom character and start out with the title of "Adventurer" instead of the template name you selected.

If you choose to create a custom character, you set your innate attributes on the profession page. You can read more about attributes here.

If after creation you discover you made a mistake in selecting your attributes or you just wish to change them, you can adjust them with the Attribute and Skill Redistribution quest once you reach level 25.

If you chose one of the basic starting templates, your skills are already selected for you. Please note that the skills for the basic templates are not set in stone. You can adjust them as much as you want. However- if you adjust them too much, your character will be classified as a custom character and start out with the title of "Adventurer" instead of the template name you selected.

If you had chosen custom character on the previous page, you can now purchase your starting skills. You have 50 Skill Credits to work with. Whatever you do not spend now will be added to your Skill Credit pool upon entering the game. You can only initially specialize skills during character creation, though you can specialize more later. You can read more about skills here.

If after creation, you discover you made a mistake in selecting your skills, or if you want to specialize additional skills, you can do so with the Attribute and Skill Redistribution quest once you reach level 25.

During the February 2012 event, Master of Arms event, all heritages start with the same skills, the specific free skills for every heritage were removed and replaced with Masteries. The specific Augmentations for each Heritage remained unchanged.

At this stage you can select gender, facial features, and starting clothing. Gender has no affect on your character, it is purely visual. Starting clothing is pretty unimportant, as you will most likely sell it and replace it with enchanted clothing later.

You are not restricted to your heritage's town - any character can select any starting town. In addition, all four towns are linked together via the Town Network, so starting out in one town will still allow you easy access to the others.

This page gives you a summary of the choices you have made so far. It is at this stage that you give your character a name. You can name your characters whatever you wish, assuming the name is not already taken and that it is allowed by the naming filter. Please be aware of the Code of Conduct and the Teen rating of Asheron's Call when creating your character. Characters with offensive names may be deleted or renamed by admins. If you want to go with a name more fitting to the Asheron's Call universe, see Character Creation - Naming.

Once you have a name, hit finish and you will enter Dereth inside the Training Academy - Have Fun!