This is a general guide to chat in AC and the commands used. For a full list of all possible commands that can be entered into the interface, see the Commands section.

The local chat channel is the original and standard method of communication within the game. It consists messages from players and NPCs near the player's current location. The local chat channel cannot be used with /join or /leave like the other global channels, but it can be turned on or off using the config options.

Joining and Leaving a Global Channel

All global channels can be joined and/or left in one of two ways:

Through a text command:

For example /join general will result in the following text message appearing:

You have entered the General channel.

And typing /leave general will result in the following message:

You have left the General channel.

See the Global Chat Channel Summary above for channel names and tags.

Players are automatically joined to any channels that they have checked when they login, and they will also see the join messages on login.

Talking in a Global Channel

Players can prefix any text they wish to send to the channel with the command symbol (/ or @) and the channel name. For instance, the following will send the message to the trade channel.

@ct I have Elysa's Crystal that I'm willing to trade for 4 MMDs!

In addition, players can also set their Chat Bar menu so that everything they type without a prefix automatically goes to the selected channel.

You may also join or leave a channel by selecting it from your Character Options panel, under Chat.

You are not listening to the Trade channel!

When a player receives text from a global channel, that text will be prefixed by a channel tag (detailed below) and the name of the character who sent the text. For instance, other players listening to the trade channel when I sent the text above will see:

All global channels will display in the same text color: a kind of blue-grey.

Clicking the four numbered buttons to the left of the interface will toggle a floating chat window that can be dragged around the 3D area and resized at will. The size and position of each window will be saved for each character. The floating chat windows are translucent; in normal circumstances, items can be selected through the window, and hovering the mouse over the chat window will darken it and cause it to intercept mouse clicks.

Gameplay (includes Recall, Craft, Advancement, Housing and System Messages, etc anything which is not communication from another player or Combat/Magic)

The Gameplay category will always display in the main window (unless individual components are filtered by the @filter command). In this way we guarantee that you cannot accidentally miss important system messages more easily than they can now. The Gameplay category can be turned on or off in the floating windows, however.

Note that this functionality is in addition to the existing text filtering capabilities. In addition, @filter allows players to filter out subtypes within the "Other" category.

In addition, players can also adjust the active and inactive opacity of the floating chat windows in the new Chat options tab (although note that this slider controls all four floating windows at once; it is not a window-by-window control).

You can click on the name of another player when that name appears in the chat window as the originator of communication, and the following will happen:

The text "@tell , " will appear in the chat entry bar (minus quotes).

The cursor will be at the end of this text, so that the clicking player can immediately continue with a private message to the clicked character. 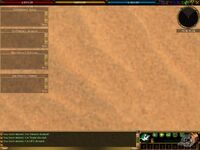 Players talking on the Allegiance Channel