In addition to the cumulative Clutch of Kings rewards, each individual King's Quest yields its own unique rewards. See the individual quest write-ups for more information. 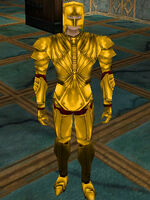 Noble Armor
Add a photo to this gallery

Guard Devon tells you, "You have not defeated all the Burun Kings recently. The rewards that I grant are meant for those that have fought through all six of the Burun Kings. When you have done so return to me. If you choose, combine the scraps of flesh that you collect from the Kings and combine them one after the other. When all six are together hand it to me for a fair reward."

Guard Devon tells you, "You have fought through a great many foes to prove your heroism. There is no question that you a person of great honor and skill. High Queen Elysa will be pleased to see that there are still those with great resolve and fortitude to undertake such a service when they are called to duty. This is your reward."

Guard Devon says, "You are a hero to us all, <Player Name>. Your efforts shall not soon be forgotten. Yet, your efforts have not rid the Burun Kings from the world. They still draw breath on Auberean and rule over their lesser. You will be called again to fight these beasts. I am prepared to grant you a reward every three weeks. Return to me when you have defeated the beasts again and I shall grant you another boon. If you have collected the hides from these fell beasts and wish to combine them together I will craft a trophy that you may display in your home. Combine the hides together and hand me the completed item. I will offer you a title and a reward for your home."

Guard Devon tells you, "I am now authorized to reward more experienced adventurers with mana forge keys and you qualify. Best of luck to you."

Guard Devon tells you, "Though disgusting, this flesh can easily be sewn. I have offered my services to create a flag that you can fly to show your victory over the Burun Kings. I will also offer you a title token. Should you return the title token to me you will be named Kingslayer!"

Retrieved from "https://asheron.fandom.com/wiki/Clutch_of_Kings?oldid=433279"
Community content is available under CC-BY-SA unless otherwise noted.