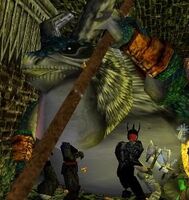 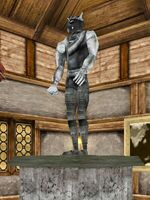 Lesser Direlands Device
Add a photo to this gallery

Watcher of the Dead

Watcher of the Dead tells you, "My purpose is plain, I watch the dead that reside within the halls of this temple. I have stood this vigil since my sacrifice over thirty thousand years ago, when the world cooled and the darkness made war upon all. The weight of time has long crushed my bones to dust and left with me with this incorporeal form. Yet, I serve my purpose with the same vigor that I did in life."

Watcher of the Dead tells you, "The delta is long covered in the harsh and dry sands. If the taint unleashed from the world long hidden by the portals within these halls has claim all will be fertile to point of death. Life will grow unchecked and there will be a choking that suffocates the core of this world and all who live on it.

Watcher of the Dead tells you, "Enter these halls and purge this taint. Then shall we rest, then shall we find peace."

Retrieved from "https://asheron.fandom.com/wiki/Clutch_of_Kings_(Broodu)?oldid=435319"
Community content is available under CC-BY-SA unless otherwise noted.