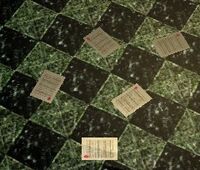 Clue Card with the riddle 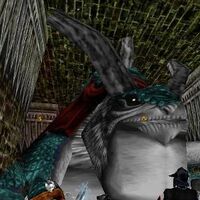 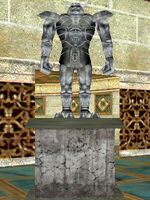 Citadels Portal Device
Add a photo to this gallery

You give Arbiter Clue Card.

You deposit your clue card in the slot.

You give Arbiter Yellow Ball.

As you place the ball on the statue, the ball disappears from your hands.

Arbiter tells you, "You may proceed."

Guard Fassel tells you, "This is for your efforts against the Burun Kukuur, King Kiree. You will need to wait three weeks before returning to me for another reward. If you wish to change your title and you have a scrap of Kiree's hide I will accept the hide and name you Kiree Killer!"

Guard Fassel tells you, "I am now authorized to reward more experienced adventurers with mana forge keys and you qualify. Best of luck to you."

You give Guard Fassel Kiree's Hide.

Retrieved from "https://asheron.fandom.com/wiki/Clutch_of_Kings_(Kiree)?oldid=435317"
Community content is available under CC-BY-SA unless otherwise noted.