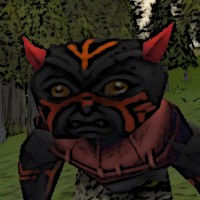 Scrum, Drudge Seraph Mystic tells you, "You have entered the halls of Scrum, Mystic of the Drudge Seraph. Kneel before Scrum!"

Baktak the Human Slayer says, "Time for a little payback!"

Kerthump the Ear Taker says, "I'm gonna bite me off some human ears!"

Kerthump the Ear Taker says, "No! Don't take my belt you dirty humans!"

Bonecrunch says, "Stay away from my apples!"

Bonecrunch says, "You! How did you get into my fortress? Never mind, now it's time for you to go crunch!"

Bonecrunch says, "This is my throne room. I am BoneCrunch and that's my throne. There, tours over, now you die."

Bonecrunch says, "Your time as masters of this land is at an end humans. You have no idea what is coming."

Bonecrunch says, "Your not part of the Plan!"

Bonecrunch says, "What? You call this loot? How come I never get your weapons?"

Bonecrunch says, "You have defeated my child. Your kind shows just as much promise as the Martine creature did. Soon you will embrace the simple truth. Clarity and purpose will be paid for with free will."

Captain Burnja tells you, "Leave now humans or I burn you so bad you be dead!"

The Drudge Caretaker spreads his collected food out in the Monouga's feeding area.

As the Drudge Hoarder dies its fingers slip open revealing the glimmer of what might be a key.

As the Drudge Slave Keyholder dies its fingers slip open revealing the glimmer of what might be a key.

As the Drudge Sneaker Pack Rat hits the ground there is a sound of scraping metal, possibly a key.

As the Heavy Drudge Prowler hits the ground there is a sound of scraping metal, possibly a key.

As the Matted Drudge Skulker hits the ground there is a sound of scraping metal, possibly a key.

Retrieved from "https://asheron.fandom.com/wiki/Drudge_Utterances?oldid=445178"
Community content is available under CC-BY-SA unless otherwise noted.