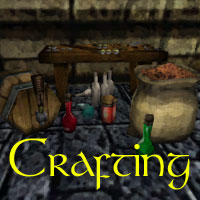 Most loot armor and clothing (and some quest items that have the special property Dyeable) can be dyed various colors by using cooking skill to apply a prepared dye pot.
For the effects of applying dye to loot-generated armor, see the different types of Armor.


The process of creating a dye pot requires alchemy skill. Dye plants spawn randomly on the landscape (the plant links below have spawn maps) or are grown by a Herbalist (Terese). If you give her Little Green Seeds she will give you a plant in return (Thanamin for Tusker seeds and different colors for seeds dropped by various types of Shreth).

Items that can be Dyed

It is possible to fail a dye job if your skill isn't high enough. The result can be either a minor failure (color changes to pink for clothing or orange for armor) or a major failure where 20 Armor Value is lost (cannot go below zero). Some people find the fail colors desirable and will purposefully use a low skill chef (cooking must still be trained). The color of plant used doesn't matter.

NOTE: With the addition of Tailoring, it is now possible to safely "fail dye" your armor without the reduction of armor level.

Retrieved from "https://asheron.fandom.com/wiki/Dyeing?oldid=285981"
Community content is available under CC-BY-SA unless otherwise noted.