Daughter of the Duke of Bellenesse and Master Swordfighter, trained by Sir Bellas.[1][2]. [3]. Her mother is a Silveran princess and Eleonora is supposed to have been the seventh in the line for the throne of that kingdom.[4]

Eleonora played a major role in starting the rebellion of the House of Bellenesse on Ispar. Prince Renlen pursued Eleonora du Bellenesse, who did not welcome his attentions. During a supposedly friendly duel, he killed his rival, Lord Darren di Marden. [5]. Years later, Eleonora defeats and kills Renlen during the final duel in another Tournament.[3].

After Silyun was founded, she and her sword trainer Sir Bellas and Carlo di Cenza managed to break in the Fortress of Varicci II and steal some tomes the Viamontian Mages of Varicci had studied to become more powerful.[7]

Eleonora du Bellenesse, Sir Bellas and Carlo di Cenza captured Sir Binwas Loc at The Shadow Pass after Eleonora defeated most of the forces of Varicci.[8][9]

Sir Loc led Eleonora, Sir Bellas and Carlo di Cenza into a trap, where Varicci di Corcosi II ambushed and killed Eleonora. After her death, Varicci II had her heart cut out.[10][11][1][6]

Once her body was delivered to the Duke of Bellenesse, the war came to a close. But the end of that war did not erase the tension that exists between the Loyalists of Sanamar and the Rebels of Silyun. [12] 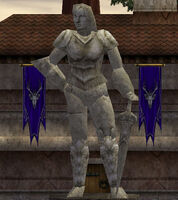 Statue of Eleonora du Bellenesse
Add a photo to this gallery

Retrieved from "https://asheron.fandom.com/wiki/Eleonora_du_Bellenesse?oldid=435836"
Community content is available under CC-BY-SA unless otherwise noted.