Quest to kill the Harbinger with his full powers and drawing on the power of the Essences.

Note: If you die, portal recall and run back to the Tunnels to the Harbinger, near Issk or Vincadi. When you click to enter the portal it will ask you if you want to return to Harbinger's Lair. Click YES. 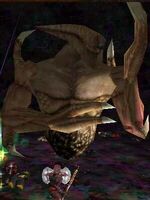 Empowered Harbinger
Add a photo to this gallery

Vincadi tells you, "You have chosen to enhance your understanding of Weapon Tinkering."

Vincadi tells you, "If you are not already aware of the fundamentals of this skill you will earn nothing. You have been warned. Now enter the Harbinger's Lair so that we might one day reach our goal."

Vincadi tells you, "You have done well to earn your reward."

Your base Weapon Tinkering skill is now 526 and has reached its upper limit!

Ciandra, Arcanum Alchemist tells you, "Ah, excellent, an arm from the Harbinger! Oh, just look at the glow it has! That's thaumic residue from the absorbtion of the Essences! This is so exciting, I can't wait to begin testing this! Here take this as a reward for helping to keep the Harbinger in check. Return it to me if you would prefer a different reward."

Ciandra, Arcanum Alchemist tells you, "No problem, let's see, I hope you can use this. If not, then return it to me for a less tangible reward."

Ciandra, Arcanum Alchemist gives you Finger of the Harbinger.

You give Emissary of Asheron Harbinger Arm Token.

Emissary of Asheron tells you, "I award you the title Master of the Elements. We are indebted to you for your efforts in keeping the Harbinger down."

Random Reward from the Emissary of Asheron

Emissary of Asheron tells you, "Here, take this as well. It is my hope that these pack dolls will prove an incentive for people to fight the Harbinger."

Retrieved from "https://asheron.fandom.com/wiki/Empowered_Harbinger_Quest?oldid=436369"
Community content is available under CC-BY-SA unless otherwise noted.