One of the leaders (the Council of Three), together with Ferundi and Frisander, of the Gelidites.[1][2]


After the Dericost were slain by the Yalaini and the Haebrean forces at the end of the Millennium War, the Gelidites were driven from their fortresses on the plateau of Gelid in the north of Dericost and were forced to live amongst the Yalaini. Their ancient crafts were forbidden, and they were guarded with mistrust and later on, faced persecution and torture.[3][4]

Trusting upon a prophesy, which predicted that the Gelidites would turn to power again during a Great Frost, the leaders of the Gelidites decided to wait this out and to found their own city, which they named Frore because of the prophesy. For this, at the suggestion of Fenngar[3] , they sailed to the island now known as Dereth. On the coast, they encountered Lord Rytheran and nearly killed him, which gave the Gelidites the room to kill off the remaining forces and travel on.[3]

The Gelidites explored Dereth: some, under Fenngar, trekked west, but the height of the peaks there were found lacking, and the area too easily approached.[3] Ultimately, they founded the Lost City of Frore in the Lost Wish Mountain Range in Dereth and extended their lives at terrible cost to buy the needed time.[5] Frisirth, a Gelidite Acolyte, discovered one of the Soul Crystals which held Ilservian Palacost imprisoned.[6]

Frisith studied the crystal and deemed the crystal harmless. The Gelidites, including Ferundi started experimenting with it.[6] The Gelidites named the Crystal The Great Work, and used it to capture the heat from the earth, cooling off the surface of Dereth in the process.[6][1] Though Ferundi and Frisander, after strange experiences during the rituals and after reading the ancient texts found in Frisirth' cave, had their doubts about the risks using the crystal, they continued their magics.[6]

The Lost City of Frore was discovered by the exploration party of Sir Joffre Tremblant of the Knights of the Golden Flame. The party, including Sir Tremblant, was slain and turned into undead slaves by the Gelidites.[7] [8][9]

A second party of Isparians was more successfull. They killed the leaders of the Gelidites (Ferundi, Fenngar and Frisander) at the Gates of Frore. Deeper in the tunnels they found Frisirth, defended by the now undead Sir Tremblant, and killed him. After this, The Great Work was destroyed.[10] 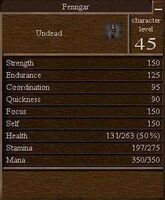 Retrieved from "https://asheron.fandom.com/wiki/Fenngar?oldid=471960"
Community content is available under CC-BY-SA unless otherwise noted.