"The Stone of Foredawn lies east of Shoushi, near 75.5E, 33.9S. This Stone appears to be the only one whose attendant temple facilities have survived the depredations of time." -- Alatar Locke, The Festival Stones of the Empyreans

Behind the Festival stone is a Meeting Hall Style Building at 33.8S, 76.4E with a tree growing in the center of it. The four stone pillars in the corners have flowering vines growing up their sides, with flowers on the top of the pillars as well. 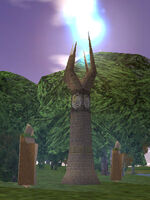 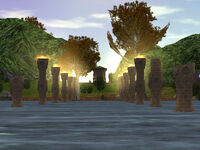 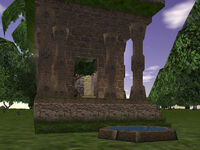 Add a photo to this gallery
Retrieved from "https://asheron.fandom.com/wiki/Festival_Stone_of_Foredawn?oldid=288644"
Community content is available under CC-BY-SA unless otherwise noted.