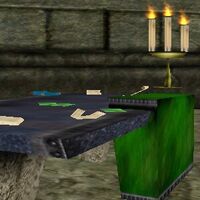 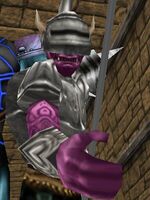 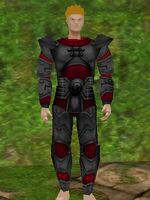 Renegade Armor
Add a photo to this gallery

Translator Aun Laokhe tells you, "Hail budhi, I come from the council chambers of Ispar Elysatah with a request. She bids that willing souls investigate the origin of the dark magics that spread across Osteth and Palenqual. She has heard that new anima have spread from the place where the kah took place. Should you find anything of note, I would like to see it. I will be calling on the keh of the Nuuani for aid to understand the things you find. Ispar Elysatah wishes to reach a peaceful accord with this new Xuta."

Translator Aun Laokhe tells you, "Should you find any odd writing that the other translators cannot decipher, perhaps the keh of the Nuuani will help decipher those as well."

While destroying the Door

"Hold your posts! Lay another volley on them, brothers," a voice yells from beyond the wall.

"Shore that door and dump more oil on them! Drive these maggots back!" A voice calls from the other side of the door.

As you shuffle through the collection of papers a few documents catch your eye. Perhaps if you showed these to Aun Laokhe he could pass the information on to the High Queen.

There appears to be very little else of use here. No new orders appear to have come down to Commander Kamenua.

Translator Aun Laokhe tells you, "They wished to ally with Aerbax? Going back to the atua ngamaru that began all the problems for the Tonk... I am sorry for my brothers. I fear they may be beyond salvation. I will see that Ispar Elysatah is informed of this discovery."

Translator Aun Laokhe tells you, "Interesting. It appears as though they modeled their fortress after Candeth Keep. How could they have done such a thing without the original designs? I will inform Ispar Elysatah of these findings."

You give Translator Aun Laokhe Orders to Contact the Burun.

Translator Aun Laokhe tells you, "Orders to establish contact with the race from beyond this world. What plans will our once brothers derive next? I will see that Ispar Elysatah receives this report. Thank you."

Retrieved from "https://asheron.fandom.com/wiki/First_Contact?oldid=451476"
Community content is available under CC-BY-SA unless otherwise noted.