Part 2: Traveling to the Lost City

Part 3: The Lost City of Frore

The Book of Minesh 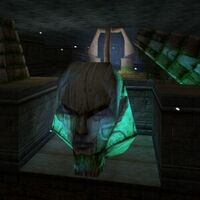 The Lost City of Frore

Memorial at start of dungeon. 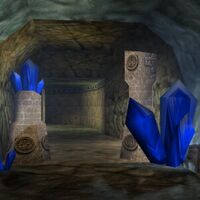 The halls are so cold they do constant damage if you stand in one place. 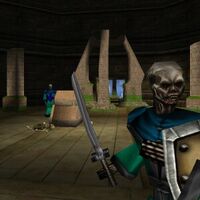 Entering the Lost City of Frore 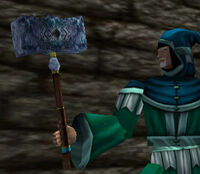 Hammer of Frore
Add a photo to this gallery

The two transcriptions seem to fit together perfectly, forming a partial message in an ancient language. It appears that some of the message is still missing.

The three transcriptions seem to fit together perfectly, forming a complete message in an ancient language.

You give Kuyiza bint Zayi the Translator Complete Rune Transcription.

Kuyiza bint Zayi the Translator tells you, "Hm. This appears to be a portalspace coordinate. Such things are not within my knowledge. You might want to seek out my colleague Marisa bint Fuya."

Kuyiza bint Zayi the Translator tells you, "She would be able to cast a portal to this location. Unfortunately, she's on sabbatical, and has gone to the town of Plateau."

Kuyiza bint Zayi the Translator tells you, "Be warned, though - you will need a substantial party to reach the Lost City, and should you die..."

Kuyiza bint Zayi the Translator tells you, "You will be unable to reenter the caves to recover your equipment. Be certain you are prepared before you ask Mairisa to cast the portal!"

Mairisa bint Fuda tells you, "I came here to be free of the madding pace of the Arcanum at Zaikhal. Unless you have urgent business, I'd prefer to be left to my meditation."

Mairisa bint Fuda tells you, "If you are another seeking the lost City of Frore, be warned - you will need a substantial party to survive. Should you die, you will be unable to reenter the caves to recover your equipment. Be certain you are prepared."

Mairisa bint Fuda tells you, "Yes, I can provide transit to the location written here. I believe you will have need of this. A passing adventurer threw it at my head some time ago, when my portal spell fizzled."

Mairisa bint Fuda tells you, "It can't be I thought this had been lost long ago...."

Mairisa slowly opens the box, the golden glow washes across her face. Her facial expression seems to become more calm.

Mairisa bint Fuda tells you, "Thank you kind adventurer, it was a kind gesture of yours to return this to it's rightful owner."

When this quest was introduced, the Aluvian lord Sir Joffre Tremblant had only just been killed and then resurrected by the Gelidite. Each of the servers had a single chance to defeat him in his new form and loot his unique Ivory Staff.

Retrieved from "https://asheron.fandom.com/wiki/Frore?oldid=471958"
Community content is available under CC-BY-SA unless otherwise noted.