This dungeon is dangerous for even high level characters (you do not drop death items in this dungeon at all). There are pits of frozen slurry that does significant damage (50+ per sec). There are also areas of cold air that do massive damage even with life protections and cantrip wards.

Cold air freezes you for 255 points of damage!

There is no entrance portal, you can tie to the surface portal of Ruschk Iceberg at 96.3N 60.0W just north of the valley where this dungeon is found.

At the end, as the Gear Knights spawn:

Iron Blade Lord says, "We have watched you this far but you shall go no farther."

Iron Blade Lord says, "Our brother will be reclaimed in the name of our Primus."

Iron Blade Lord says, "You will not be allowed to corrupt his mind and turn him to serve your will."

After killing the Gear Knights: The sound of cracking ice fills the air. The large ice golem is moving.
The path to the frozen Gearknight is now clear. This golem seems to have been protecting the Gearknight.
Its duty apparently complete the golem fractures into shards of ice.

Getting the Frozen Gearknight to spawn in a killable form is glitchy at best. Ideally, after you get the big golem at the end to move (either by killing the Gear Knights or killing the golem), the frozen Gear Knight should respawn in killable form, but that does not happen more often than not. If it does not spawn, your best bet is to log out for 5 minutes or so to let the landblock reset. When it does, kill the big golem and hope things work better the second time. Try fighting the big golem against one of the side walls, away from its spawn point. That seems to interfere less with the Frozen Gear Knight's spawn point. If you do manage to get the frozen Gear Knight to spawn in killable form, hit it with fire attacks. Ordas Myr will spawn after you destroy the ice. Talk to him for your rewards - 10 Adventure Tokens, Gear Knight Crossbow, and 150,000,000 experience points 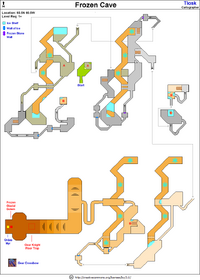 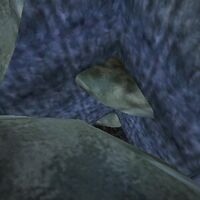 At the start of the dungeon there is a steep jump down. 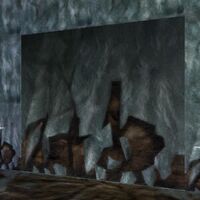 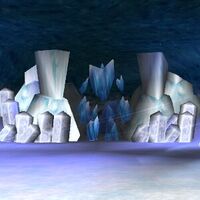 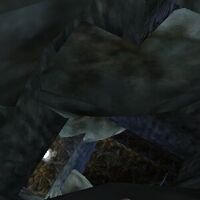 There is a Freezing Mist Golem at the top of a jumping shaft in the middle of the dungeon.
Add a photo to this gallery
Retrieved from "https://asheron.fandom.com/wiki/Frozen_Cave?oldid=435691"
Community content is available under CC-BY-SA unless otherwise noted.