This Quest is also known as 130 Flagging Quest

Completing this quest provides you with access to Vissidal Island.

To obtain Sezzherei's Lair Recall Gem, you will need to hunt the Fallen (who spawn at random) from either the area around the VOD Lifestone or Caul Island outside of the Bore in the gully areas.

Swamp Stones can be easily obtained at the Mosswart Fort near Hebian-to.

Yellow Jewels can be obtained by hunting Virindi around Ayan Baqur. 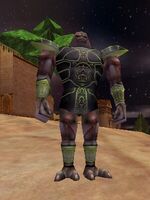 Final portal to Vissidal Island.
Add a photo to this gallery

Shuthoth tells you, "Welcome, friend. I seek warriors in search of great adventure. I represent one who would grant the Isparians of this world much power, much knowledge."

Shuthoth tells you, "She has found something. Something powerful beneath the waves of this world. A city, ancient and doomed. The blue-skinned King did his part to raise it from the deep, but I daresay he could not have done it alone."

Shuthoth tells you, "Now that the island exists, the lady would ask Dereth's hunters and adventurers to explore its mysteries."

Shuthoth tells you, "If you seek such a challenge, I bid you take this gem and place it within the empty eye of one of Aerlinthe's Watchers. The Watchers will tell you what else you must do."

Shuthoth tells you, "You have the spark of adventure within you. Good luck, my friend."

Shemza tells you, "A warrior! A warrior comes! Brothers, feast your eyes on one who would give their lives willingly to the great lord!"

Shemza tells you, "You seek to bask in the glory of Grael, do you not? You seek to join us in the worship of he who is more powerful, more glorious, than all who have come before? My brothers and I, we were the first to join his side. We were there when he led us to victory over the old ones. We helped him slay the mages and lay waste to their cities. We were there when he led an army upon the heretics of the light."

Shemza tells you, "And now you are here. You seek to barter with us who have given our souls in exchange for life eternal. Those of us who have lengthened our lives for the sole purpose of delivering warriors unto him."

Shemza tells you, "I seek a boon. One small boon. The masters of the portal carry a token of golden hue. A token that I would claim as mine own. Find it and deliver it to me. Then the first part of your quest shall begin."

Shemza tells you, "I have altered your body. You may now use our portal near Ayan Baqur."

Handing in Yellow Jewel to Shemza

You give Shemza Yellow Jewel.

Shemza tells you, "Seek out the Radiant Crystal. Bring a shard to my brother Lurza. Then he will treat with you."

Handing in Radiant Shard to Lurza

You give Lurza Radiant Shard.

Lurza tells you, "Long have we waited, trapped within these crystalline forms, waiting for those who would join him in his quest. And now you come. You come seeking our approval. But are you worthy?"

Lurza tells you, "There is something I seek. The key to one who once followed our cause. A traitor who makes his home among the winged demons of the dark. Bring the key to this fallen lord, and I will grant you passage."

Lurza tells you, "The demon Sezzherei once called himself our brother. But when he betrayed our lord to the ancient mages, he fell from Grael's favor. Our brother Tursh slew Sezzherei on the battlefield, or so we all believed. Now he claims the dark as his master, and seeks to appease its twisted whims."

Lurza tells you, "Now find the Dazzling shard, and give it to my brother Dmesne."

Handing in Dazzling Shard to Dmesne

You give Dmesne Dazzling Shard.

Dmesne tells you, "There is a metal, a pure metal of great power. You use it to strengthen your arms, barbarians that you are. One bar is all I ask. One bar and you shall have my blessing."

Dmesne tells you, "Within this chamber lies the Brilliant Crystal. Take a shard to my brother Rhujun, and you will be escorted to the isle of water."

Handing in Brilliant Shard to Rhujun

You give Rhujun Brilliant Shard.

Rhujun tells you, "There are those of wet skin and barbaric means. They carry the meanest of stones, a stone whose power is unknown even to them. I would have it, little one."

Rhujun tells you, "I would have it now."

Handing in Swamp Stone to Rhujun

You give Rhujun Swamp Stone.

Rhujun tells you, "The cousins of these young ones make their homes on the bones of the ancients. They know not the power that surrounds them. Such simple creatures they are."

Flame Guardian tells you, "Welcome to my lonely isle, little one. You seek the mysteries of Vissidal, do you not? Many have come before you. Many will follow in your footsteps. The power which once lay dormant beneath the waves has surfaced. I fear the new rulers of this world will regret their meddling before all is done."

Flame Guardian tells you, "You seek a boon from me, do you not? You seek my permission to further your quest?"

Flame Guardian tells you, "You must prove yourself, little one. You must bathe in the cleansing waters of the deep. You must destroy the spirits of Water that lay claim to this isle."

You have killed 5 Water Golems! Your task is complete!

Flame Guardian tells you, "The waters of the deep cover your flesh. You have been cleansed. I sense the spirit of Grael about you. I deem you worthy, little one."

Water Guardian tells you, "You have done much to reach this point. You have appeased the Gatekeepers. You have been bathed in the waters of the Deep. You have bested the warrior Bur Lizk. And now you seek my blessing."

Water Guardian tells you, "As you were bathed in the waters of the deep, now must you be cleansed by its fires. Slay the spirits of Flame. Bask in their glory."

You have killed 5 Fire Golems! Your task is complete!

Water Guardian tells you, "You have been cleansed by the spirits of Flame. The essence of Grael wraps about you like a lover's embrace. Soon, you will be his."

Water Guardian tells you, "Give this to the Watcher of the Deep, and then you shall know glory."

Handing in Watery Token to Watcher of the Deep

You give Watcher of the Deep Watery Token.

You feel a low rumble, and the statue looks down upon you. You hear a whisper in your mind, "The isle of the deep is yours," then all grows quiet.

Retrieved from "https://asheron.fandom.com/wiki/Gateway_to_the_Deep?oldid=472161"
Community content is available under CC-BY-SA unless otherwise noted.