The GEAR KNIGHTS are a mechanized race of unknown origins. While they are technically machines, they evidence all the personality of the other races of Dereth.[1] Aetherium is the sustenance of Gear Knights [2] and essential to create or activate Gear Knights [3] [4], with the Aetherium Power Core being described as the "heart of a Gear Knight. [5][6] Though they seem to be animated in a similar manner to Golems, they instead rely on a maze of small interconnected parts and gears, which allows them a far greater level of stability, and far less dependence on any sort of animating magics.[2]

Gear Knights hail from a world that is mostly artificial, appearing to have been crafted in layers over the original world's surface.[2] Mana flows are surprisingly strong, but markedly different in nature when compared to Auberean.[2] When the Yalaini originally made contact with the Gear Knights, they assumed the metal beings were some type of golem, but this was corrected and the Yalaini research team was told that the Gear Knights were the predominant race of the world.[2]

Aetherium was found in large amounts on the homeworld of the Gear Knights and held responsible for the large mana flows on their world. [2] When the Empyrean researchers opened a portal to this world, they discovered these characteristics, and samples of Aetherium were acquired and sent to the Collegium Occultus for further study. Their studies in creating spells to track the materials interaction with their world's Mana Flows have actually identified a few sparse deposits of Aetherium on Auberean, apparently from falling comets colliding with this world. [2]

The Yalaini ambassadorial team made arrangements for an embassy of Gear Knights, including important members of all of the Houses, to come meet with the Emperor and several other important dignitaries. The Gold Gear House sent a Primus to join their embassy. [2][7]

After the Olthoi invasion and Asheron's collapsing the Portal Network, the Yalaini did not get the Gear Knight Embassy to their Portal before the network was collapsed and they were trapped on Auberean. Though the Gearknights proved formidable while defending against the Olthoi, after time, the Gear Knights were running low on Aetherium. The Empyrean survivors opened a portal to Dereth for them, in the hope the Gear Knights could find enough Aetherium on the island to keep them working. The Empyreans taught those that didn't know the spell for detecting Aetherium how to do so, and the Copper Cog members of the embassy also have the ability to detect it over a limited range. [2]

During the Portal Year Era, the Apostate Virindi discovered the use of Aetherium [8]> [9] Preliminary investigations also revealed that the artifacts [10] at the site containing Aetherium were remnants of a long-thought-vanished race of mechanical entities from an unknown world. The Virindi believed that, if these entities could be reproduced or reconstructed, they would make superior servitors and guardians. These subverted Gear Knights were seen as a possibility to replace the Renegade Tumeroks and Lugians, since the Renegades were deemed as "too unreliable". [8] To this goal, they constructed a beacon to lure a delegation of Gear Knight.[5] Also the Isparians and Asheron heard about the discoveries[7]. One of their researchers, Nurino, studied mechanical parts found in the cave where desperados threatening Baishi and Lin were holed up, that could be a portion of some ancient form of Golem[11] One of the experienced Isparian explorers was sent to research the rumors, and if possible, establish a first contact. This contact however, did not end too fortunate for the young explorer.[12]

The plans of the Apostates succeeded, and the newly arrived Gear Knights established footholds both in the A'mun Desert and the Direlands, not too far from Fort Tethana, the Direlands Gear Knight Invasion Area. It was the Primus of the Iron Blade who initiated this invasion, thinking to have located what he deemed the "Empyrean Betrayers", who lured their predecessors into a trap on their world.[13] His suspicions were confirmed because the first delegation of Gear Knights did not return.[12][13] Because of the scarcity of Aetherium in Dereth, the Gear Knights erected large walls to direct the mana flows. [14]

The opposition the Virindi met by the first force of Gear Knights newly arriving in Dereth was too much and their first facility was destroyed.[15] The Apostate Virindi crafted Simulacra and used them to assault newly arriving Gear Knights, in an attempt to deceive the Gear Knights into thinking Isparians were responsible for the actions of the Apostates.[5][16][17] [18]

The Gear Knights on Dereth are cut off from their homeworld by the Iron Blade Primus.[19]

In the mean time, just after the Invasion started, Master Craftsman Takahume of the Arcanum started excavations on the base of research on the notes, artifacts, and signs tracking the passage of the Gear Knights once they had arrived in Dereth. He did this in the hope to find the lost Embassy and the Gold Gear Primus, originally send to Auberean. By turning the Gear Knights into allies or at least redirecting them against their actual enemies, the Apostates, the Isparians would be in a much better situation. [20] He discovered the Gold Gear Primus in some ruins in the Olthoi North, when the Olthoi threatened to overrun the site and a Bronze Gear Knight woke up.[20] and started collecting Gear Parts and Aetherium to reactivate him.[4][3]

After the Primus, Atamarr, was reactivated, one of his first activities was to try to re-establish connections. He also tried to contact fellow-Gear Knights in the Direlands Invasion Area, to convince them that not the Isparians were to blame, and not to trust any information given by the Iron Blade Primus.[17]

On Dereth, those Gear Knights which are allied with the peoples of Dereth come from the schism between the Gold Gear Primus, Atamarr, and the Iron Blade invasion forces which seek to wipe out both the 'renegades' and the Isparians on Dereth. Their previous House ties behind them, and with the blessings and support of Atamarr, the new Gear Knights of Dereth have been given the freedom to build for themselves a new beginning.[1][19]

The Gear Knights usually operate in large Houses, which are organized somewhere between a feudal society and a standing army. Each House is led by a Primus, and has a portion of the society for which they are responsible.[1]

The race is very militaristic by nature, and some Yalaini debated (inconclusively) whether or not they may have originally been created as guardian golems for another race.[2]

Interesting to note is that though the Gear Knights come from a world laden in magic, they do not use much magic, nor are they reliant on much more than small shards of Aetherium, which seem integral to their function. Though, unlike the Motes in the Empyrean Golems, these 'Power Cores' seem to only provide sustenance to their body, and are depleted of their power in time. Also to note, if you remove this Power Core from a Gear Knight, it falls into a dormant state, but can be reawakened by applying a new core. They are similar to the Empyrean Golems in that manner. [2]

The Gear Knight social structure is divided by both Caste and House. They have several Castes within each House, and each House governs a different aspect of the Society. Within each House is a caste structure with servants, merchants, internal military and a ruling caste. While each House has a focus, there seems to be a high level of interaction between the Houses on every level. The efficiency of the Houses, as well as their interactions with one another, can only be defined as efficient and nearly flawless. The Gear Knights exhibit a high level of individuality, save in that all of them seem to have a highly defined sense of honor and Purpose. Their efficiency seems to be born of everyone holding to their job joyfully, as it is their greatest honor to serve their purposes faithfully. [2]

Aegis of the Gold Gear

Shield of the Gold Gear
Weapons 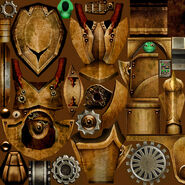 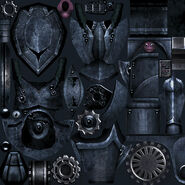 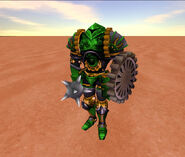 Retrieved from "https://asheron.fandom.com/wiki/Gearknight_Lore?oldid=469779"
Community content is available under CC-BY-SA unless otherwise noted.