Asheron's Call has been updated or "patched" on a monthly basis from its launch in the fall of 1999. Occasionally large content additions are made in the form of new islands, such as Aphus Lassel and Aerlinthe. Other times an area is repurposed, such as Graveyard and Valley of Death. AC has had two expansions that also introduced new regions. Dark Majesty brought Marae Lassel and Throne of Destiny brought the Halaetan Isles. Below is a listing of the geographic regions and areas that have been added, expanded, or are explicitly referred to in game. 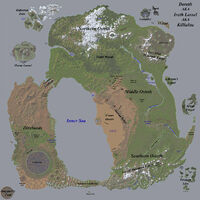 Map of Dereth
Add a photo to this gallery

Retrieved from "https://asheron.fandom.com/wiki/Geographic_Areas?oldid=364306"
Community content is available under CC-BY-SA unless otherwise noted.