Emperor of the fallen kingdom of Dericost, currently representing the Ice Throne, first Dericost to become an undead, also known as His Eternal Splendor.[1][2][3] [4][5][6]

Hevk Loz tells you, "Sickly from birth, Geraine IV, was taken by sisters who had stepped aside from the path and brought into a state that would forever sustain his body, soul and mind. Geraine in turn taught his people, but the sisters were not so foolish to not enter this state themselves. Many sleep, while in waking dreams, they think their time nears as a new singer raises her voice. But what of Geraine? His life is over, but still he endures, watches and waits. His death began his life anew."
[7]

Notwithstanding Hevk Loz' comment, Geraine IV, also known as His Eternal Splendor, was a Dericost heir to the ice throne whose father, Geraine III came into contact with Falatacot witches who wanted to make their home on Ireth Lassel.[8] The witches promised to make Geraine III's son immortal if he allowed them to stay in Ireth Lassel. Geraine III agreed, and they performed a blood ritual on Geraine IV, who died and was reborn an immortal on that occasion.[Citation Needed] Geraine IV proceeded to turn many of the Dericost nobles he associated with into immortals, but he botched many of these blood rituals, and as a result many Dericost undead are ugly tattered corpses walking around. [Citation Needed](See Book of Minesh)

Geraine IV controlled the Filinuvekta, the Dericost faction controlled by the nobles of Dericost, most notably, Lord Rytheran, Lady Aerfalle. The Filinuvekta wished to continue to rule their kingdom in secret. The opposing faction, the Latzimestal believed that as the generals of Dericost they controlled the true power of the Kingdom, and should be able to rule it as they saw fit - openly as undead. The Latzimestal seized the realm from the Filinuvekta and launched an aggressive campaign of military expansion, until they were defeated by a coalition lead by the Kingdom of Haebrous, under King Jailne, and the Empire of Yalain, under Empress Alaidain. [9] Throughout the Millennium War, Geraine and the other Winds watch the Lords without interfering, but finally the Winds abandon Vasmora in disgust at the Lords' failures and excesses. The Winds create hidden fortresses in other parts of the world, notably Dereth, which they called Killiakta.[8] [10] The two factions worked together during The Fourth Sending of Darkness to fight the forces of Bael'Zharon and Geraine took an active part at the Battlefield of Ayn Tayan[11]

Until recently, Geraine IV was never seen, but Lord Rytheran and Lady Aerfalle as his consorts made appearances.[11] [12] The dericostian Nobility, represented by Aerfalle and Rytheran also leads the faction of the Eldrytch Web [13] [14] Geraine however, led the efforts of the Dericostian undead to stop the advance of the Ancient Olthoi Queen, when she returned to attack Dereth. The undead sealed the passage of the retreating queen using the machines assembled by the Isparians via the Undead Mechanic.[15]

Geraine became more active, and, with help of the Archons of the Way started experiments with new creatures, creating the Gurog [20] [21][22] and the Bloodstones [23] [24] [25] [26] [27][22]. Geraine IV's initial plans for the Gurogs were changed, as the Archons failed to create the controllable, unstoppable creatures promised. They did succeed in turning the simple Mattekar into a far more formidable creature, but they failed to impart the loyalty and intelligence needed to make them a truly devastating weapon for the armies of the Emperor.[22]

The Frozen Valley seems to be the center of Geraine's recent activities. Expert placement of the completed Bloodstones has kept what the Bloodstone Facilities safe, even after the Archons failed to keep those hidden. Releasing the Gurogs to the surface, Geraine and his minions continue to weed out their weak, while getting the opportunity to study them in an interactive environment.[22]

After getting hold of the Book of Eibhil, he tries to manipulate the timelines and portalspace. [28] [29] [30] In this, he cooperated with the Apostate Virindi.[27] [29][22] The Archons helped Geraine destabilizing the portals. [31][22]He has found a means of both peering into the future and manipulating what he sees. With this knowledge he has changed the path of this world to move away from some "Golden Age" the Isparians sought to create. This was the true purpose behind the Apostate manipulations, as well as the plans set in motion in the Frozen Valley.[22]

To further destabilize this 'temporal possibility', Geraine turned out to be behind the kidnapping of Hoshino Kei [27] [32][31] and was, in the end, responsible for her death by using her for a ritual to change the timelines and sacrificing her to the Book of Eibhil [33]. His mingle with the Ley Lines also caused the barriers around the City of Neftet to disappear.[34][22]

In one of AC2's story arcs a group of undead called the Archons of the Way steal the book of Eibhil from Geraine and try to use it to supplant him. The book takes them over and attempts to destroy the world. Geraine stops them and meets the physical manifestation of the book, a Falatacot witch named Eibhil. However, Eibhil is not actually the author of the book. Geraine kills Eibhil and vows to author his own book not merely use another's. 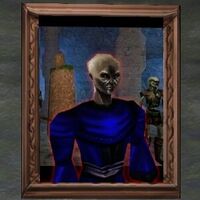 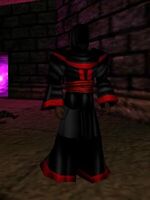 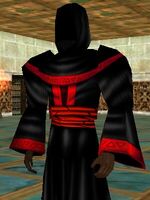 Retrieved from "https://asheron.fandom.com/wiki/Geraine_IV?oldid=458580"
Community content is available under CC-BY-SA unless otherwise noted.