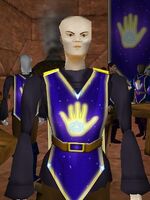 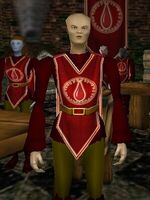 Atsuko
Add a photo to this gallery

Dialog for the other societies is identical.

Kojina tells you, "Greetings. I see that you have gained access to the isle north of the Veseyans. I wonder if you could help our Society with our studies."
Kojina tells you, "There is a rare and coveted Glowing Jungle Lily that only grows on that isle. Some trick of the nature of the isle makes them glow with energy. I need at least 20 of these for my research for our Society."
Kojina tells you, "Be warned, the lilies are very fragile, and you may have difficulty picking them, even if you use great care. They draw creatures of the isle to them, however, so you may be able to get the flowers from the creatures that appear near the lily."
Kojina tells you, "If you get me at least 20 Glowing Jungle Lilies, I can grant you Commendation Ribbons and some tokens for the Quartermaster. If you get more than 20, I'll take them all, since they are very fragile and do not store well."

Retrieved from "https://asheron.fandom.com/wiki/Glowing_Jungle_Lily_Collector?oldid=406377"
Community content is available under CC-BY-SA unless otherwise noted.