This dungeon, along with The Floating City was one of the randomly appearing dungeons that were added to the game. The portal to this dungeon can appear in place of any regular monster spawn in certain areas of Dereth. The portal is a yellow color which differentiates it from most randomly spawning town portals which are green or purple. Normally it is seen in the Northern and Southern regions of Osteth.

It also contains a portal to The Floating City's Tunnels.

The Imprinting Mote for the Golem Construction quest is also found in this dungeon. 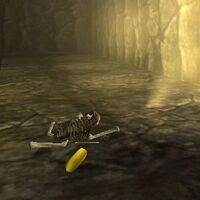 Imprinting Mote
Add a photo to this gallery
Retrieved from "https://asheron.fandom.com/wiki/Golem_Sanctum?oldid=422025"
Community content is available under CC-BY-SA unless otherwise noted.