The Graveyard is an area in the Southeastern Direlands designed for high-level small group hunting. The graveyard has been updated with new content during many events.

The Graveyard was the first place to see a lot of new tech being developed.

It would seem that in the distant past Rytheran under the direction of, Geraine, His Eternal Splendor, destroyed the House Mhoire using the Book of Eibhil. It is unclear why, but in Rytheran's Letter he refers to the House Mhoire as the traitor house. It is presumed that the House of Mhoire left because they objected to becoming undead like Geraine and many of the other Dericost nobles. For millennia the House Mhoire was buried beneath the ground, but recently, as written in his letter, Rytheran left the Mage Academy in search of a mysterious magical book, the Book of Eibhil. He found the book and began to read from it to restore his memories and power. By reading from this book, dark magic rose the Graveyard to the surface once more.

Texts Related to the Graveyard:

Areas of the Graveyard 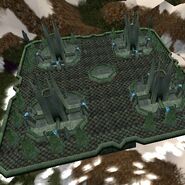 Mhoire Castle in the sky above the Graveyard 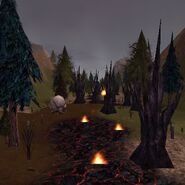 Luminance Added to Nighttime Spawn during Lessons from the Past event.