Harlune the Misanthrope has disappeared from the Mite Maze and the mysterious Roderick claims to be working on his behalf. He asks you to deliver a diplomatic message on his behalf to the Falatacot on Bur. 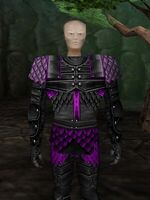 Falatacot Herald
Add a photo to this gallery

Roderick tells you, "Hmm...Ya think ya might be interested in doin' a favor for Harlune? Ya look tough enough to survive what he has in mind."

Roderick tells you, "The Falatacot Matriarchs sent him a message, ya see, askin' if he'd like to ally. Well, of course he don't - the Falatacot can't be trusted one bit. So he wants to send a message back...but ya know how Harlune can be."

Roderick tells you, "Anyways, he asked me to find some volunteers to deliver the mission. He didn't tell me to mention it, but I'll be nice and mention it anyways - the Falatacot ain't gonna be happy when they read the message."

Roderick tells you, "Here, take this and bring it to Bur. One of the statues up there should lead to a new place where ya can go and deliver the message, and then ya better be ready for a fight. If ya win, bring something back to prove to me that ya won."

You hand over all of your Diplomatic Message from Harlunes.

The Falatacot Herald reads the message from Harlune. At first, his aged face is impassive, but as he continues reading a visage of sheer fury appears.

Falatacot Herald says, "You would dare mock our offer so?! You would dare present me with such insults?! Do you see that corpse in the corner? That is from the last messenger we had to deal with, dispatched from that Dericost worm Rytheran!"

Falatacot Hearlad says, "It is fortunate for you the Matriarchs themselves are indisposed - your deaths shall be quick, instead! Come, servants of the Blood, destroy these interlopers and drain their blood for our ends!"

Falatacot Blood Prophetess says, "You would dare such insolence? Fear our wrath!"

Roderick tells you, "So...ya survived, huh? Congratulations. To think I thought ya wouldn't make it..."

You have been given the title "Expendable" by Roderick.

Roderick tells you, "Ya seem like a glutton for punishment. Still, I gotta admit - I'm impressed."

You have been given the title "Hard to Kill" by Roderick.

The statue looks as if it has been tampered with...its eyes are dull.

The statue's eyes light up suddenly - it can be used again, you would surmise.

The statue whispers in your head, "You bear a message for the matriarchs. You may pass."

Falatacot Warden Statue teleports you with Welcomed by the Blood Witches

You search the body again, but you find nothing new.

The statue whispers in your head, "You bear a message for the matriarchs. You may pass."

Retrieved from "https://asheron.fandom.com/wiki/Harlune%27s_Diplomacy?oldid=437393"
Community content is available under CC-BY-SA unless otherwise noted.