Harvest the Seed of Twilight. 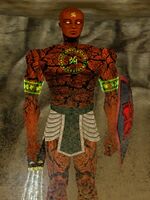 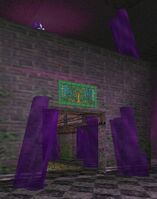 Inside the Temple of Twilight
Add a photo to this gallery

Norus tells you, "Thank the Deru someone came!"

Norus tells you, "We were originally set up on the surface, but Hoshino Kei's spectral skeletons destroyed everything and slew all of the miners."

Norus tells you, "I barely made it out of there alive."

Norus tells you, "This should be the location of the spirit of the Lady of Twilight and Rest. According to the Lady of Mysteries, her spirit should rest in some sort of bulb or plant."

Norus tells you, "We need to recover her essence as quickly as possible, preferably before the spectral skeletons figure out a way past the Guardian or the creatures inside the temple."

Norus tells you, "If you'd be willing to brave the temple, you'll find the Guardian deeper in these tunnels. Just be very careful, the tunnels are still packed full of invaders."

You allow Norus to examine your Seed of Essence.

You hand over 1 of your Seed of Essences.

Norus tells you, "You made it past that pile of invaders, as well as the temple itself. Well done indeed."

Norus tells you, "Now, to see if the essence is intact..."

Norus chants over the seed, and a small wisp of light pours out of the seed and into his hand.

Norus tells you, "Beautiful, what is contained here is both intact and free of corruption. Well done, well done indeed."

Norus tells you, "It's only a small fragment of her essence, but it's progress all the same. As for this seed, I think you may find it useful."

Norus gives you Seed of Twilight.

Norus tells you, "If you're interested, I'll likely need your assistance again in a couple weeks. The bulb should be ready to produce another seed by then."

Norus tells you, "Also, as you have aided all of the Lost Sisters, you may wish to seek out Lord Brem, in the encampment that watches over Hoshino Kei's Fortress. He is seeking those adventurers who've been brave enough to assist us in collecting all of the essences of the Sisters."

You give Calitoth Legendary Seed of Twilight.

Calitoth tells you, "Thank you. I'll send this along to my mistress. Please, accept this gift in return."

As you hand the spirit-trap gem to the Guardian, all of the gems in your possession shatter in a pulse of light and the released energy is absorbed into the spirit.

You hand over all of your Pulsating Spirit-trap Gems.

A voice in your mind says, "Thank you for this, but I will not allow you entry."

A voice in your mind says, "You are here unannounced and unexpected, but as you have aided me with this fragment of my essence, I will not send you away."

A voice in your mind says, "Seek the one in these caverns who can give you understanding and purpose, if you wish to enter this place, and then return to me."

You allow Bulb of Twilight to examine your Alb'arean Ore.

You offer up the Alb'arean Ore to the large plant. The stack of ore turns into a golden mist which is then absorbed in the plant.

A moment later, the plant releases a small glowing seed.

You hand over all of your Alb'arean Ores.

Retrieved from "https://asheron.fandom.com/wiki/Harvesting_the_Bulb_of_Twilight?oldid=457126"
Community content is available under CC-BY-SA unless otherwise noted.