Investigating the disturbance on Marae Lassel. 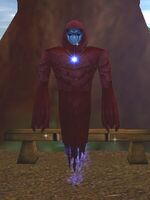 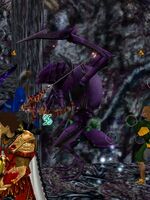 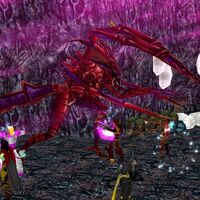 Olthoi Hive Queen
Add a photo to this gallery

Virindi Delegate tells you, "Greetings. The Reaver of Dreams has sent me here to request the assistance of your kind. There has been a great rift in the portal energies flowing through the lands of Marae Lassel."

Virindi Delegate tells you, "The Tumeroks, who have long battled their "Wharu", are far too simple a creature to sense these rifts. Only one with great consciousness could be responsible for such violent modifications in this long-standing balance."

Virindi Delegate tells you, "We must determine the cause before it is too late."

Virindi Delegate tells you, "Gather a party of the mightiest warriors and find what has evoked such drastic changes on the Marescent Plateau. Begin your search to the east of the Tumerok capital. A single tone resonates strongly in my thoughts from this region and The Reaver of Dreams believes the source can be found there."

Other Interactions
Breaking the Rings

Aun Kahmaula strikes the Tuning Fork against the stones and a low pitched tone resonates outward. The menhir stones crack and break!"

You give Aun Gehaua Tuning Fork.

Aun Gehaua tells you, "How curious. This is an instrument used by your people to assure the highest quality of tones?"

Aun Gehaua strikes the Tuning Fork against the stones and a low pitched tone resonates outward. The menhir stones crack and break!

Aun Gehaua tells you, "What trickery is this...?"

Aun Gehaua tells you, "The demise of your kind is near fleshlings!"

Aun Tanaua strikes the Tuning Fork against the stones and a low pitched tone resonates outward. The menhir stones crack and break!"

The Hive Eviscerator explodes in a geyser of acid, spraying you from head to toe! You currently reek of Olthoi secretions. Fortunately, this will fade away in about two hours.

A booming voice reverberates throughout the chamber..."This failure means little! My success is inevitable you foolish fleshlings!"

As the Olthoi Hive Queen collapses to the ground, a familiar voice echoes through the chamber. "Your constant meddling ends this day meatbags! Twisting, shaping, and bending the wills of those simpleton Tumeroks was an amusing task. Meet the real queen! She will show you who is vermin and who is royalty!"

Deep within the winding tunnels of the Marescent Plateau, the party of the brave <player name> has slaughtered the Olthoi Hive Queen. As one, the Olthoi Hive swarms recoil from her final burst of terror, and slowly begin to withdraw back into their hives.

Retrieved from "https://asheron.fandom.com/wiki/Hive_Queen_Assault?oldid=457540"
Community content is available under CC-BY-SA unless otherwise noted.