Start a Wiki
Previous Patch - All Patches - Next Patch 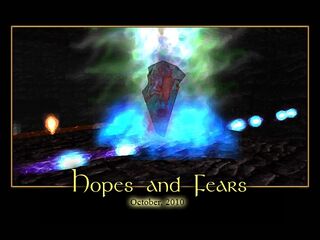 Asheron says, "The Archons went through with their plan to rid themselves of the Black Pool."

Asheron says, "I fear that the damage the caused to the land may have spread further down then they expected. If so than we must prepare for the fight that will come."

Asheron says, "This is exactly why I urged them to stop their plan. I can only imagine how his power may have grown while imprisoned so deep within the world."

Town Crier tells you, "I've heard rumors that there is now more than one of Asheron's Emissaries mobilizing adventurers against the Apostate Virindi."

Town Crier tells you, "It seems the Archons may have succeeded in their quest to destroy the Black Pool. It is strange, though, that they seem to be missing or in hiding."

Town Crier tells you, "News! The Festivus time is once again upon us!"

Town Crier tells you, "Another of Asheron's Emissaries has been sighted just south of Cragstone. In all my time on Dereth, I've never seen Asheron so active. Dark times ahead, I tell you."

Town Crier tells you, "Asheron seems to be even more concerned now that the the ground has been damaged by the Archons magic. What is below the surface of this world that could worry him in this way?"

Ulgrim the Unpleasant tells you, "It's a shame those Archons went out of their way to get rid of that Black Pool. A drink of that substance gave me a buzz like I've never felt before."

Ulgrim the Unpleasant tells you, "Hmmph. Some stupid glowy-thing tried to get me to go on an adventure. What's with those things? It wouldn't even get me something to drink as a reward...

Ulgrim the Unpleasant tells you, "Asheron seems to be doing a lot of work lately to get some pile of lost Empyreans back. I hope at least one of them is a brewer, or a barkeep even."

Ulgrim the Unpleasant tells you, "Geraine causing trouble. The Archons causing trouble. Asheron worried about the consequences of the actions from those Archons. Sounds like another day in Dereth to me. I'll be here drinking, let me know if anything interesting happens like a giant winged creature were to show up and start laying waste to the land. Now that would be worth checking out."

Portal.dat
Add a photo to this gallery
Retrieved from "https://asheron.fandom.com/wiki/Hopes_and_Fears?oldid=450367"
Community content is available under CC-BY-SA unless otherwise noted.