Note: The walk through below is written for someone who is doing the quest solo. Aegis/health rations/potions are *strongly* recommended. It is also recommended that you study the map and familiarize yourself with the hidden portal locations (Lilitha/Empyrean rooms). Unless you are a mage or using a magic defense rare, you will likely not be able to resist all of the spells cast by the rifts/dolls.

If you happen to be doing this quest with a group, it is faster to study the map and decide who will hit which levers to speed the process. If soloing, you will not want to fight anything, as you must move quickly to get to each door before it closes again. It is also recommended to read the entire walk through before starting as many steps must be done quickly after one another. 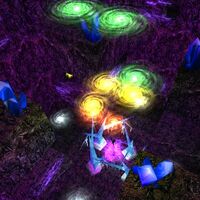 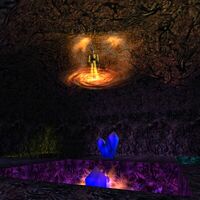 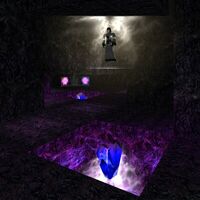 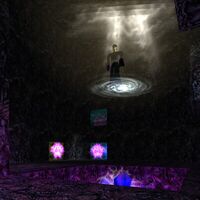 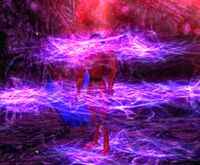 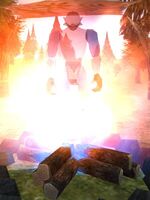 Aun Aulakhe tells you, "Several moons ago, my father Shimauri summoned us to his accustomed story hour, to tell of a story never heard by my generation.

Aun Aulakhe tells you, "Long ago, in the combined pasts of the Hea and Aun, Aun Tanua was a nigh-legendary warrior who was beloved by our xuta. He left our gates to challenge the Puh in his mudflats of Ahurenga, never to return. We thought perhaps he had been captured or slain by the Hea, but now we have discovered the truth
when they were unable to conquer him, the Hea called upon the Atua ngamaru. Answering them, the floating demons bore down and plunged him down into the depths of the Lightning-Sea, never to be heard of again.

Aun Aulakhe tells you, "My task is to find warriors brave enough to enter the Lightning-Sea, who can search for him and bring him back to us. My buhdi Tikakhe tells me that you might be the person we are looking for.

Aun Aulakhe tells you, "When you find Tanua, warm him with the ember of the akiekie fire that you see on the ground, for there is no telling how Aun Tanua's mind might have fared in his captivity.

Aun Aulakhe tells you, "My training, both in my homeland and with the Aualuan of your xuta, has taught me to create the Burning Pools that shimmer upon the Lightning-Sea. I have opened such a portal on the surface of the akiekie pond, and if you dare swim its depths, enter it and find Aun Tanua!

Aun Aulakhe tells you, "A word of advice
All must depend upon the coordination of their fellows to navigate the Shimmering Sea. Farewell, and Tanae speed you in your hunt."

Lilitha inclines her head toward you and waits, looking numbly expectant

Lilitha reaches toward you, and absently gropes her own face. She seems confused

Lilitha tells you, "That one is... The box hasn't seen flesh poison in... in a long time.

Lilitha tells you, "They brought a man here once. They split him open and scooped out his insides. They made a pile, like sticky fruit. Then they put other things inside him that glowed red and purple.

Lilitha tells you, "One of the Masters said they learned how to do it by studying the box. It said the man's name was Martine."

Lilitha tells you, "They put a thing in the box's head. A crystal thing. When the box becomes agitated it screams. The Masters told the box it is a keeper."

Lilitha tells you, "The box attends the master."

Lilitha tells you, "They took the box outside in a cloud. It's nothing but purple. You could fall forever, and everything was bent this way and that. But in some places there were blue ribbons that crackled and danced."

Lilitha tells you, "There were things around the ribbons. They looked like glowing water and trailed strings of jelly. They turned as the box went by and poked each other with the jelly-strings. They were the size of houses. Maybe. Size doesn't work right outside."

Lilitha blinks at you uncomprehendingly

Lilitha tells you, "Why is that one on the other side of the wall?"

Lilitha tells you, "The box used to count the days with marks on the walls. It used its fingernails. It counted four years. Then they changed the walls so they wouldn't mark. That was a long time ago."

Lilitha tells you, "Does that one see the hand? It is not the box's hand. They took that. They put it in a glass bubble and it turned into fog. They attached the box to this one later. Sometimes the hand talks to the box."

Lilitha tells you, "The box doesn't know what they are. They didn't talk at first. They just kept stabbing glass pins into the box. The first thing they said was the box's own voice, like an echo. Then they started putting the box's words together in different ways."

Lilitha tells you, "Temenua. That one caught the box as it slept. It brought the box to a child, and the child gave it to these things.

An angry blush colors Lilitha's cheeks, and an unexpected gleam rises in her eyes..

Lilitha tells you, "It BOUND me. No one EVER --

... but a faint, glissando shriek comes from her head. She flinches, and the gleam dies as quickly as it came.

Lilitha tells you, "They took the box apart twice. First they looked for what was inside the box, but they said it was empty. Then they wanted to know what made the box go.

Lilitha tells you, "They did it with blue lights. They drew lines on the box and it fell to pieces.

Lilitha tells you, "They wouldn't let the box move. The box watched it happen, until the light reached its eyes.

Lilitha abruptly falls to her knees and begins to retch, hugging herself tightly.

Aun Tanua gently cups the ember in his clawed hands, and as its glow warms his skin, his past gradually seeps into memory. For the first instant in an endless monotony of time, he remembers. Ezheret. Palenqual. Timaru. Home

As determination and strength return to the old warrior's stance, he turns to you once more

Aun Tanua tells you, "I have no knowledge of how long I have been imprisoned here. Endless half moments on moments, my memory failing, my own keh draining away...All I know is that I cannot leave, for the Atua ngamaru have me captured inside these walls of light.

Aun Tanua tells you, "My own Timaru is far from me, but you have brought me an ember of her heart, and once again my people are with me. You must have been sent with this gift by one of my brethren, and for that I thank you.

Aun Tanua tells you, "There is but one way to let my brothers envision my fate, and I must ask one more favor of you.

Aun Tanua lifts the akiekie ember to his face and softly blows across its faintly glowing surface. As his keh suffuses the ember, it suddenly fans into a flame. He holds it a moment longer, then relinquishes it to your care

Aun Tanua tells you, "Give this to the one that sent you here to me. He will understand its intent and what should be done. Go now, and if you ever tread upon the shores of Palenqual, let her know I am with her."

Aun Aulakhe tells you, "Aun Tanua was unable to return with you again, but look! He has infused this ember with his own keh. I wonder...

Aun Aulakhe tells you, "This is a triumph, for even though he remains in captivity, Aun Tanua's spirit can now dance with our ancestors in the akiekie fire. For this I must reward you, for you have done the Tonk of Timaru a great service this day.

Aun Aulakhe tells you, "Give me the magic Buadren you received from Tikakhe, and I will add to its medicine.

Aun Saritea stands protectively in front of his fledgling akiekie

Aun Aulakhe takes your Buadren and carefully leans into the heat and smoke of the fire. He slowly starts to beat the drum, infusing it with the heat and magic now emanating from the fire's warmth. As he drums, the fire's glow coalesces around the drum with a shimmering intensity. When it seems as if the Buadren itself will catch fire, Aulakhe removes it from the flames

Aun Aulakhe tells you, "You have done the Aun of Timaru a great service today, and for this I shall reward you. I have bound this Buadren to Aun Tanua's own keh, so you may carry it against your enemies. In your time of greatest need, invoke him, and he will come to your aid.

Aun Aulakhe tells you, "My own mission here is not finished, for I shall not walk through the gates of Timaru until the day when Aun Tanua himself may walk beside me. If you would like to brave Aun Tanua's prison once more, come to me after the Shining Twins have finished their journey, when I will have regained the strength to stabilize the Lightning-Sea.