Ulgrim the Unpleasant tells you, "I knew Kurth was going to go on over to the other side. The man was loyal as a dog, but a starved dog will turn feral eventually. I guess Elysa never had any pets." [1]

Commander Jared Kurth played a major role during the The War of Blood and Shadow Story Arc.
Originally, Commander Jared Kurth was the Commander of the Garrison at Fort Tethana, which was separated from the main forces by the Renegades.[2] He could be found (as a NPC) fighting against the renegade forces in the Renegade Incursion. Already at that time, it was clear that the defenders of Fort Tethana were not happy with the amount of support they got from Elysa Strathelar, and did not seem unwilling to accept the help of the Viamontians.[3]
Later it turned out, the Queen did try to send enforcements, but they were blocked by the Viamontians on the access to the Dires from the Northern Landbridge[4][5] and the army was destroyed on the Shadow March.[6]


During the Ashes and Dust event, Kurth mysteriously disappeared [12] and was replaced by Arwyth Margyle in the Renegade Incursion. Dissatisfied with the support he got from Queen Elysa, he took up the offer of Count Dardante and the viamontian King Varicci to take up the command of his army, and a special sword, Heartbreaker, was forged for him out of Shade Iron Ore.[13] [14]He was turned into a raving Viamontian Knight without a will of his own by Count Dardante.[15] [16]


He commanded the raid on Glenden Wood from his Commander's Quarters in North Glenden Prison and lured Antius Blackmoor into a trap [17] during the Ashes and Dust Live Event. During the following fight, Antius was killed, the sword Heartbreaker was broken, and Kurth was killed by the players recruited by Antius. [18]

After being defeated, Commander Kurth, armed with a new weapon, Souldrinker, [19], was again released upon various towns across the land.[20]


Serving Dardante and therefore Dardante's Master Grael, he was spotted raiding towns with Grael's forces during the Shattering the Dark Live Events.[21]

The experiments with Grael having gone awry, he can now be found in Black Ferah's Vault, part of the Mukkir Aspect of Grael Quest, weilding his new sword, Souldrinker.

Jared Kurth tells you, "If you come here to fight, then fight. I've no time for discourse."

During the April 2006 Shining Runes and Shadowed Hands patch, Commander Kurth was released again by Count Dardante and attacked different towns.[25]
He appeared as Commander Jared Kurth at first a level 437 "Shadow Stalker" Male Viamontian Knight, during the second wave as a level 512 "Soldier" Male Viamontian Knight.[26]. Also his sword Souldrinker, increased in strenght.[27][28]
When killed, the note Specimen 1347 Report could be found on his corpse Usually, after killing most of the people present, he disappeared and Count Dardante appeared, giving out Dardante's Viamontian Propaganda. Kurth was healable, and on some worlds, people choose to side with him and the Viamontian forces.

Sliver of the Sword Heartbreaker 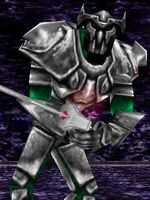 Retrieved from "https://asheron.fandom.com/wiki/Jared_Kurth?oldid=282533"
Community content is available under CC-BY-SA unless otherwise noted.