Help the Jester clear out the voices of the lalalas from his head for bit. 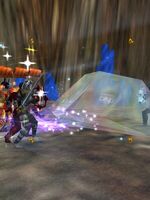 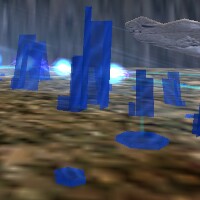 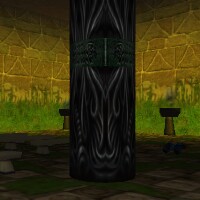 Strange Pillar
Add a photo to this gallery

Jester tells you, "I can't think with all these lalalas in my head. I had an idea that might shut them out, for awhile at least. I believe that one of the mana suckers feeding on the exposed ley line may have the first thing I need."

The ley line is North of here. It's quite dangerous having it exposed like that, be careful."

You allow Jester to examine your Piece of K'nath Core.

You hand over all of your Piece of K'nath Cores.

Jester tells you, "Hey! This is what I need! How did you know? Oh wait, I sent you to get this didn't I?"

The Jester holds the core in front of himself and begins to move his hands in alternating circles. The core slowly spins between his palms and you see lines of power pulse over it like a burning spider web.

Jester tells you, "Here, I need you to take this to a place I heard your people just broke into. Rythy's Private Library may have something he kept the Book of Eibhil in. I need you to get the sphere as close to whatever he kept it in."

Jester tells you, "AHahahahahaha! You should see the look on your face! You remind me of a pet Grobbit I had when I was little. Yes you do! Roll over! You can't have a treat if you don't roll over lalala!"

The Jester stares into the distance with his head cocked to one side listening to something. Then he shakes his head and looks at you again.

Jester says, "Ooo, what's over there?"

Jester tells you, "The core should be able to absorb a small amount of the radiant energy the book gave off during it's stay in Rythy's Book Hole. Return to me if you are successful."

The Jester smiles and holds his arms out charitably.

Jester tells you, "I'll understand if you're captured and tortured, being still kept alive in a state of anguish for the rest of your brief life, and you're unable to bring back my K'nath Core."

Jester tells you, "I'm told you may need a seal to access his Library. I remember seeing something like a seal in a tomb's chest south of here."

Jester tells you, "Good Luck. Oh, and maybe if your really helpful I'll give you some cake."

Speaking to Jester after giving him Piece of K'nath Core

Jester tells you, "Couldn't you find Rythy's Library? I need you to place the K'nath Core in whatever Rythy was using to store the Book of Eibhil in."

The Jester holds out an open hand and closes a finger for every statement.

Jester tells you, "Sentinel Statue next to Mage Academy Portal."

Jester tells you, "Find where the book was kept. This is important! Repeat these words, "Klatoo Veranda Nec#%@!"

The rmaining word is difficult to hear as the Jester covers his mouth with his other hand."

Jester tells you, "Place core where book was."

Jester tells you, "Return core to grateful Jester who will give you some cake."

The Jester holds his now closed fist to his chest in a salute.

The statue seems to glimmer for a moment, and a disembodied voice intones, "Welcome back, Master. Even in our ageless vigil, you have been long absent."

The statue seems to glimmer for a moment, and a disembodied voice intones, "Welcome back, Master."

The lectern pulses with a malign intelligence as you touch it, and it almost feels like it is examining you... Suddenly, a discordant shriek echoes in your mind, and the pedestal makes its displeasure known.

Master's Lectern cast Enervation of the Heart on you, but it is surpassed by Avalenne's Blessing

You give Master's Lectern K'nath Core.

As you touch the Knath Core to the lectern it pulses malignantly. Suddenly, a discordant shriek echoes in you mind.

The Knath Core begins to pulse with the same malignant glow of the lectern.

You give Jester K'nath Core.

The Jester takes the core from you and begins to juggle it with a bunch of colorful balls. His dexterity is nothing short of amazing.

Suddenly he grasps the K'nath Core and stares at it as colorful balls fall to the floor around him.

Jester tells you, "The core. You found where the book was kept."

He closes his eyes breaks out into a fit of giggles before getting himself under control and holding the K'nath Core before him.

Slowly a peaceful green light spreads through the core, overtaking its malignant red glow. The core's light now reminds you of sunlight seen through a canopy of rustling green leaves.

For the first time since you met him the Jester looks exhausted.

Jester tells you, "I must ask one more favor of you. Take the core to the ancient gardens beneath Rytheran's Tower and gather the final energy emanating from the deep places there. Humans from... Y-chew have been investigating the garden entrance lately, they may be of some help.

The Jester begins stumbling about and mumbling to himself. He casts a glance over his shoulder at you and spins, somehow seeming to vanish behind himself.

You give Strange Pillar K'nath Core.

As you bring the core closer to the pillar the symbols appear to draw back from it, but that could just be the light. The core seems drawn to the pillar like a magnet. It clinks against the pillar, sticking firmly. A vibration runs up the pillar and through your arm shaking loose a drift of dust. Then the core detaches suddenly and you are able to pull it away.

You give Jester Empowered K'nath Core.

The Jester opens his mouth impossibly wide and swallows the core. The shifting green light begins to radiate from his eyes then from behind the teeth of his smile. As he begins to laugh insanely it spreads along his arms to his hands, bursting in green beams of light from his fingertips.

With a bright flash of light the Jester's laughter subsides and he raises his head. Calmly, almost lovingly, he looks at you with a weary smile on his face.

Jester tells you, Thank you friend. I have forgotten how peaceful it was without the voice of T'thuun in my mind.

A sparkling green tear falls from the Jester's right eye.

Jester tells you, "I must hurry. I'm not sure how long I have before the voices return."

Jester tells you, "First I will reward you for the gift you have given me."

The Jester chuckles kindly and awards you the Title "Jester's Little Helper."

The green light fades from the Jester's eyes and he begins to laugh hysterically.

Jester tells you, "Now I will tell you as much as I know before it floods my thoughts with its will."

The Jester produces a book and places a hand over its closed cover. You hear a furious scratching come from the book and you see thin lines of color appear on it's pages ends.

Jester gives you The Jester's Revelations.

Jester tells you, "Take this book. I hope it will answer some of your questions and help prepare your people for what is coming. Take this bookmark as well."

Jester gives you Two of Hands.

With a high resonating note the Knath Mother flips over and begins to quickly melt away leaving a crystalline core behind.

Retrieved from "https://asheron.fandom.com/wiki/Jester_Focuses?oldid=458676"
Community content is available under CC-BY-SA unless otherwise noted.