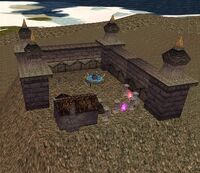 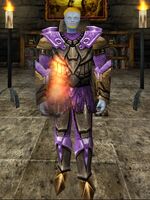 Sir Belfelor
Add a photo to this gallery

Grand Mother tells you, "I wonder if you might help us, since you have helped us once before. There is a group of knights who has broken away from the murderous Viamontian loyalists. They call themselves the Knights of Karlun."

Grand Mother tells you, "Unfortunately for them, they possess something that would be useful to us, a ring that once belonged to Karlun, the Great Father of Viamont."

Grand Mother tells you, "I would have you take this ring from their leader, a knight named Sir Belfelor. Kill him if you must. But to even see this Belfelor, you must infiltrate the Knights of Karlun and gain their trust. They have a fortress located at 89.0N, 67.6W."

Grand Knight tells you, "You have served us before, I see. There is another task for you, if you are strong enough for it. The King desires a bauble in the possession of a rogue group of Knights who have left our service. These so-called Knights of Karlun disdain the... physical gifts brought about by the transformation of our own Knights. But they distrust the rebels, too!"

Grand Knight tells you, "The leader of the Knights of Karlun possesses a ring that once belonged to the great Karlun, founder of the nation of Viamont. Do whatever you must to gain their trust and take the ring from their Grand Master, a fallen knight named Sir Belfelor. You will probably have to kill Belfelor. Seek them out at 89.0N, 67.6W"

Guard tells you, "Speak with Sir Ginazio. He deals with all outsiders."

Guard says, "Knights of Viamont are men, not monsters. Varicci has gone too far..."

Sir Ginazio says, "Fighting alongside one of those foul Eater things would make me feel as debased as a Milantean..."

Sir Ginazio says, "Karlun would not have approved of using fiendish beasts to do our fighting..."

Sir Ginazio tells you, "Ah, have you come to join the Knights of Karlun? I do not trust you enough to send you on to speak with our Grand Master. Perhaps if you could prove yourself trustworthy..."

Sir Ginazio tells you, "If you would enter our confidence, seek out the vile Eater-thing that swallowed my sword. It can be found at the heart of the Eater Pit, located at 88.8N, 72.6W . Bring me my sword, and we will speak further."

Sir Ginazio tells you, "Ah, you found my sword. Wonderful. Please give it to me, and I will tell you how else you might aid the Knights of Karlun."

Sir Ginazio tells you, "Well done. You have my thanks, but you have not proven yourself to the Knights of Karlun just yet. Now I must ask you to take on a more sensitive task. One of our leading warriors, a knight of great virtue named Sir Coretto, journeyed into the Heart of Madness to discover what afflicts the Fiun who have gone mad. It has been some time since we heard from him. Please follow him into the Heart of Madness at 84.8N, 68.6W and discover what has become of him."

Sir Coretto tells you, "I would wager my friend Sir Ginazio sent you to find me. Noble of you, but futile. I am no use to anyone. I am... broken. I have discovered things too terrible to bear."

Sir Coretto tells you, "Please, put me out of my misery. Strike me down so I may die like a true Knight. And when I am dead, take my last testament to Ginazio... So he will know. So they all will know."

You bring Sir Coretto to a fiery end!

Sir Coretto tells you, "Thank you..."

Sir Ginazio tells you, "Well done. I see you have succeeded in making contact with Sir Coretto. Give me his last testament, and I will grant you permission to enter the Hall of Karlun and speak with our Grand Master, the honorable Sir Belfelor."

Sir Ginazio tells you, "This is... heartbreaking. We all will mourn the great man that Sir Coretto was, and I thank you for putting him out of his misery. You have proven yourself to me. I will give you permission to enter the Hall of Karlun and speak with our Grand Master. You have also been judged worthy to receive a piece of armor of the Knights of Karlun. Wear it with honor."

Sir Belfelor tells you, "You may have fooled Sir Ginazio, outsider, but I know you are working for someone else, and that you seek the Ring of Karlun. I will not attack you, but you will get nothing from me. You may as well leave."

You bring Sir Belfelor to a fiery end!

Sir Belfelor tells you, "And so I die by treachery. Go running to your masters, corrupt puppet."

Handing in Ring of Karlun to Grand Mother (Whispering Blade)

You give Grand Mother Ring of Karlun.

Grand Mother tells you, "Beautiful. It is regrettable what had to be done to brave Sir Belfelor, but we are glad the Ring of Karlun is ours. You have our gratitude."

Handing in Champion of Silyun Token to Grand Mother

You give Grand Mother Champion of Silyun Token.

Grand Mother tells you, "May your kindness to the people of Silyun be known to all you meet."

Handing in Ring of Karlun to Grand Knight (Rossu Morta)

You give Grand Knight Ring of Karlun.

Grand Knight tells you, "Excellent work. One might grieve for the man Sir Belfelor was, but he was a fool and deserves his fate."

Handing in Friend of Sanamar Token to Grand Knight

You give Grand Knight Friend of Sanamar Token.

Grand Knight tells you, "May your loyalty to the glory of Sanamar be apparent to all you meet."

Retrieved from "https://asheron.fandom.com/wiki/Knights_of_Karlun_Quest?oldid=470037"
Community content is available under CC-BY-SA unless otherwise noted.