These steps can be done alone or with a smaller group, there are no rewards and participation is not essential to being a part of the later sections of this quest.

Part 2: Tenkarrdun and the Relic Town

(Optional) Part 2b: Retrieving the Sword of Lost Light Infusions and Black Boulder 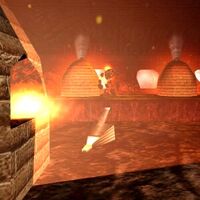 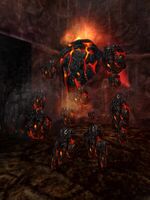 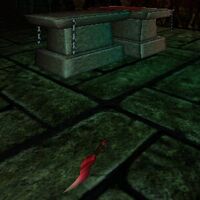 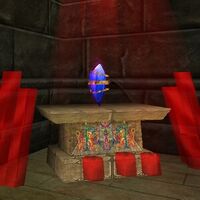 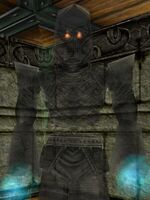 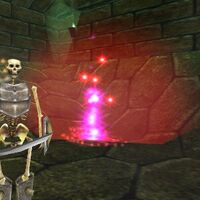 Portal opens in Lady room when shard is given to Galaeral.

The golem turns and fuses the bar into the Sluice Gate. Somewhere below, you feel a grinding vibration through the ground... The fires of Tenkarrdun have been redirected to the ancient Yalaini forges.

The golem, obeying ancient directives, turns and ignites the forges. Far below you, a tremor runs through the earth. The decayed machinery groans, shivers, and grinds quickly to a halt. Mount Tenkarrdun has become active again!

As <Player> smites the Hellfire, the flame-creatures sigh, and begin to disappear back into the vents and fumaroles they surfaced through. But, from the base of the mountain's slopes, you hear the whisper of falling ash, and the clacking of petrified bones...

Just before <Player> scatters the petrified bones across the ash of the port, it attempts to cast a portal to retreat! The ancient port of Aerlinthe is peaceful again... or at least as peaceful as it ever gets. But now the party has only ninety minutes to find and destroy the Lady of Aerlinthe!

Ghost of Galaeral tells you, "The songs of my sisters echo across eternity and I am left to rot; bound through the arts of ill-wind taught by sisters who had fallen to the call of the twisted dark. Thousands of years bound against my will to a tether not of my making, bereft of power and ability to purchase a final release, I have waited and watched within the walls of this prison.

Ghost of Galaeral tells you, "The skein of her life now draws taut as she is stirred to action, re-exerting her command over these halls and drawing on the lives of those she once imprisoned. Through the countless years, most that were bound here against their will have become lost and slipped into madness, the echo of their lives now scattered dust and formless agony. Not I.

Ghost of Galaeral tells you, "I recall the device, the tool used to pull the blood of my heart into a vessel that held my precious vitae long enough to rip free my soul and lock it within the walls of this keep, evermore a servant to her will. But my years of servitude draw near an end, and through the voices of elder sisters who sang to the deep and refused to sell our secrets to the Dericost, I am given a moment of clarity to find my freedom. Yet the walls ever remain my prison.

Ghost of Galaeral tells you, "Aerfalle has changed. She has grown her flesh anew and taken the glamour of her youth. But all this imagery is false. She risks more power at the cost of those bound in these halls. My fallen sisters seek not redemption, but through their folly they will give me mine. Aerfalle's strength lies in tunnels long crushed by the weight of time, halls within this keep that you cannot traverse, halls which I can still travel.

Ghost of Galaeral tells you, "But I cannot lessen her strength without an instrument of sacrifice. The blade that drew my heart's blood must be used to stab at her crusted heart and weaken her strength.

Ghost of Galaeral tells you, "Bring me the dagger and I shall take my revenge and aid you in her destruction.

You give Ghost of Galaeral Sacrificial Dagger.

A haunting voice echoes in the halls of the Keep. "Light is not lost on this world yet. I shall enact my part of this bargain, outlander. Seek vengeance for the countless years, the suffering and the agony of those she has destroyed. Blessings of Ithaenc go with you."

On far Aerlinthe Island, an intrepid band has found the lair of the Dark Lady Aerfalle, at whose whim the earth itself does shake. But the bold <Player> has driven her back into her hidden crypts, and the ground stills... until she next awakens.

The withered corpse of Aerfalle hisses in rage as it is hewn in twain... "I shall not be sent to a final rest by primitives like thee, <Player Character Name>!" her severed head says from the stones. "Enjoy this insignificant victory, child. For I have walked this world for over ten millennia, and I shall walk it long hence your little race has returned to the dust that birthed thee!"

Leikotha examines her sword, feeling the weight of the blade in her hands

Leikotha tells you, "I had dropped this on the hill of Ayn Tayan... My rage had so blinded me. Ferah, had played me for the fool...

Leikotha tells you, "Spinning lies in my mind...

Leikotha tells you, "What I did...

A sound slowly builds within Leikotha, until finally an unearthly scream emanates from her. You feel the din about to deafen you when the scream stops

Leikotha stares silently at the blade of the sword

Leikotha tells you, "How... where... ai, thy mind tells me that thou has found in one of Aerfalle's caches. Foul magus that she is. I shall reward thee for thy efforts.

Ghost of Galaeral tells you, "I see you have defeated the cruel Lady and thus achieved retribution for those she has destroyed. A deed of such high measure must be rewarded.